2011: Prelude (or - My Conversation With Einstein) 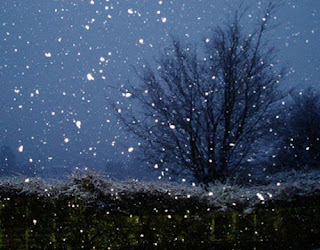 Yes, I'm a little behind the eight ball, but I have made a resolution for the New Year as if I had an IQ of 200+ (why not shoot for the stars?): Solve/complete/prove the Grand Unified Theory. Why? Because what I want most this year is the same thing I want every year: peace on earth and less facial wrinkles. The Grand Unified Theory (the merging of three non-gravitational forces into one theoretical framework) as a viable solution to the world's (and my) wrinkles is not pie-in-the-sky, even if purely theoretical, the fact that I'm entertaining it as succor is a major shift in my universe—pragmatically speaking. 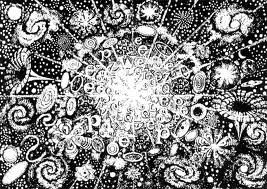 However, I don't have an IQ of 200+, so you see, there are serious limitations to meeting my 2011 goal. It's January 3rd, and I wish I were smarter and younger (but I'm not on both counts), and I've already set myself back by two days. This means only one thing: I need to meet with my old acquaintance, Mr. Albert Einstein. Fortunately, he has graciously accepted my invitation to lunch.

Einstein joins me at my round kitchen table, a large leaded glass bowl of fruit before him, and comments, "'A table, a chair, a bowl of fruit and a violin; what else does a man need to be happy?'"

"Oh, about the violin, Mr. Einstein," I reply, "I must confess I don't actually have one.

Einstein shrugs his shoulders and looks up at the matte-white ceiling. "Humph," he snorts. "At least you've got mango and kiwi," he says, as he slips a slice of the silky tropical fruit through his pursed lips.

"If you would be so kind, tell me if you would, Mr. Einstein, in layman's terms—if that's possible—more about your idea of unifying your theory of relativity with electro-magnetism, this particle adventure of yours, so to speak. But first, Al," I continue (as if it's imperative I get it off my chest), "I want you to know that my day didn't start so well, with an awful lot of troubleshooting in fact, prompted by a phone call from Shalita the Bully at Bank of America, announcing that my Line of Credit was past due to the tune of $5.77, which, mind you, conflicts with the zero balance noted on recent statements. And did I care, she asked, to ruin my credit rating for a mere $5.77?

"As you can see, Al, BOA has an accounting—not to mention "communication"— problem, which is why BOA is also known, at least by me, as BOAP: Blatantly Ominous Accounting Problems. 'No, it is not me who is delinquent Ms. Shalita the Bully,' I wanted to say to her. Sheesh, it's these types of nonsense events that force me to resort to purchasing expensive moisturizers, Al!"

Einstein says nothing. Looks oddly at me and sucks on a grape.

"So anyway, Mr Einstein, take a look at my face—that's gravity for you. Why is it that we haven't yet solved the problem of gravity? Why is it the BOAPs of the world can operate in outer space, while I'm relegated to the earth? I suppose if the problem at hand were solved, big cosmetics and personal care companies might be painfully pinched by the abrupt drop in Deep Wrinkle Moisture sales."

Einstein shifts in his chair, pulls a compass out of his vest pocket and inspects it. I'm afraid I'm losing him. "Excuse me, Mr. Einstein, I diverge. I apologize, I'm just venting. I understand that gravity is precedent to keeping us grounded. I just don't like it."

Einstein gets up from the table, juggling an orange in one hand, grabbing a piece of chalk with the other, and hacks away at the kitchen blackboard, white powder drifting to the wood floor. "Call me Al," he says. "And it's all right, I'll knock out a few equations for you." 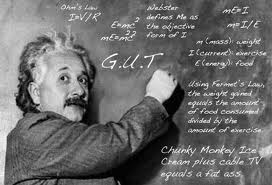 "You know what they say," he reasons, "'If you can't explain it simply, you don't understand it well enough.'"

"So true, Al," I nod. I'm not very good at equations. I look at the slate and see foreign formulas floating from it in 3D, like an animator whipping out a cartoon series.

"Is this like String Theory?" I ask. "And never mind, Al, that you didn't quite solve the GUT riddle, I think it's remarkable that you even thought it—unifying forces and all."

Al blushes a bit, sits back down, pulls on a grape cluster, and tells me that this theory actually sprung from his fear—or denial—of quantum mechanics. "Very interesting, Al." I cup my right hand over his, which is perched limply on the table, and sympathetically say, "You know this idea of yours lead to an understanding, by our modern day scientists, of high energy electromagnetic and weak forces as aspects of the same force? This ought to bring us closer to the meaning of life, don't you think? Maybe even to everlasting life? So you see, in the end Al, you didn't quite lock yourself into hopeless scientific problems."

Al digs a thumbnail into the orange and a citrus spray erupts, droplets landing on the tip of his large-pored nose, and says that I may be getting ahead of myself, but he's glad we're lunching together; and I agree.

I glance up at the blackboard. "You're telling me that this GUT thing combines three of the four fundamental forces—strong nuclear force, weak nuclear force, electromagnetic nuclear force and gravitations force—into one single equation? Why three forces? And what about the fourth force: gravitational force? Wait, don't answer that. My kids would tell us it's because all measurements, all things in fact, come in threes.  Small, medium, large. Fahrenheit, Celsius, Kelvin. Richter, Moment Magnitude, Mercalli. Judicial, Legislative, Executive. Stratus, cirrus, cumulus. Gas, solid, liquid (but they forget plasma). The Father, the Son, and the Holy Spirit. The three wise men. There are three types of lavas and even three types of lava flow. But you already know all that, Al, don't you? If this is true though, can you tell me why the water temperature options on my Whirlpool duet are cold, warm, hot and super hot? And why are the spin speed options low, medium, high and extra high? And why no super cold or extra low?"

Al tells me to call Whirlpool as he fingers a strawberry, and I thank him. "That's a good idea," I answer.

"You know, a chocolate fondue would be marvelous with this," Al suggests as he pops the berry into his mouth.

I look at Al, straight into his dark, dilated pupils, "Anyway," I say, "You have to separate gravity from just about everything else, now don't you? Gravity: it's a force unto itself, Al." I'm not so sure he wants to hear this. He  peels a ripe banana, takes a bite and chomps, a banana bit clinging to his mustache. "Again, just take a look at my face. Physical gravity and mental gravity, both despairingly heavy-handed, don't you think? And you know this is precisely why I need you here, why I called upon you, for a breakthrough. We need to get to GUT, because if we get to GUT, we can throw in the fourth force, gravity, and move on to the next theory: the Theory of Everything!"

Al sits up straight in his chair, throws the banana peel on his napkin, and clears his throat. I offer him a glass of water and he takes it.

"By the way, have you heard about the cupcake boutique on Rue Saint-Sulpice? You should check it out, Al, you'd love it." 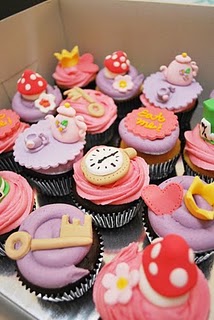 Einstein admits that he really can't explain GUT, or anything else for that matter, in layman's terms. "It's alright," I assure him. "Don't sweat it. I've got my own theory. It's kind of like the everything that goes up must come down thing. Now I know back in October I started my fiftieth year by imagining life as linear, and you may or may not have agreed with that; but I know that life is really a concentric circle, and we're all aiming at the center target. And I also know that no matter how good a thing looks, tastes or smells (Veuve Clicquot and Ring Dings, for instance), eventually it's going to be exposed as foul-scented substance resembling crap. Is this all life has to offer, Al?"

"That's sort of a pessimistic view," says Al, "but you may be on to something there."

"Anyway, Al, It's all relative, so to speak, now isn't it? My gravity is actually different from yours, and the guy seated next to you. Hey, was he invited? At least from my scientific observation point."

GUT. Alchemy. An eloquent description of the meaning of life. I wish it all.

"Imagine if the world were unified, and every problem could be solved with one single equation," I remark. "Have I set my goals too high? Is it too much to ask—peace on  earth, good will to men, slow the aging process, and get BOAP off my back?"

"'I have just got a new theory of eternity!'"Al suddenly announces. "But I need to go now. Mind if I take this apple?"

I sense my eyebrows shifting upwards. That was a little random, I think. Al slowly lifts himself from the chair, shuffles to the the door with the ruby Empire in hand, and nods his head—a silent thank you.

Not another theory to ponder... "Oh, by the way Al," I shout after him, "look what I got for Christmas—remember how I scalded my last teapot?—it doesn't have a whistle but it's shiny and new..." 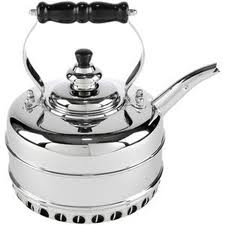 Al smiles—a mischievous grin—waves his hand in the air, and snuffles, "So lange."


"Dankeschön, Al," I smile back. "Glückliches neues Jahr!" I cheer, as I survey sparkly particles fluttering in a vaguely organized manner, tumbling into the empty glass fruit bowl.