The Vuvuzela: As an Instrument of Torture, More Effective than Sensory Deprivation

Seriously, as an instrument of torture— and the polar opposite of Sensory Deprivation—I think the vuvuzela is pretty efficient. It would break me in about five seconds. It does. Only five seconds of exposure to that blasting, b-flat monotone buzz of bees gone mad and I’ll be singing. I’ll tell you anything you want.


So why is South Africa doing this to us? Perhaps they want to be known, they want to be heard; and how they are. Hey, every country deserves the right to be recognized for its own unique experience and culture (and South Africa, undeniably, is most deserved of this), but is this the mark—or the blare— that South Africa really wants to leave on the world? According to www.South Africa.info the vuvuzela is “South Africa football’s beautiful noise.” In case you’ve been living in a hole for the past few weeks, you can listen to it here, and judge its beauty for yourself:


These days, the root cause of my night terrors (ok, so I exaggerate a little—but definitely the source of a recent migraine).


And I’ll bet the beehive that, for those people who’ve ever suffered a severe reaction to a bee sting, the relentless buzzing drone of the vuvuzela has been the source of much panic. I sure wanted to run for an EpiPen when I first heard the swarm, and I’m not even allergic to bees.


I get that this annoying noisemaker has been part of the South African football experience for some twenty years; I get its significant origins, modeled after the Kudu horn—an African instrument made from the horn of antelope which was used to summon villagers; and I get its symbolism as renewed pride, unity and hope; but today’s cheap (manufactured in China at .03 cents a pop—sold for $6.00/piece on the internet) simulacre of this ancient horn that all of South Africa is blowing—sometimes at up to 120 deafening decibels, this South African football music (using that term loosely) tradition, is going to create an entire generation of hearing-impaired football/soccer fans. And as much as I love to watch my husband and son bond over the World Cup games, I can’t help but worry about this, and wonder, marvel, at how they can sit on the couch with their chips and drinks for hours, entranced, seemingly oblivious to the relentless hum, without breaking. Not once. Perhaps it has something to do with Sensory Overload?


And if for some twisted reason you can't get enough of this noise, YouTube now offers the vuvuzela button. Simply click on the soccer ball icon in the lower right hand corner of any video, and you can let it croon to you all day long.

This Boy-Man Whipped Me. And it wasn't a dream.

Look at him—look how happy he is, how satisfied. That’s right, this boy, on the cusp of Teendom (he’ll arrive there in two days, in fact), beat me mercilessly. Without so much as a drop of sweat. 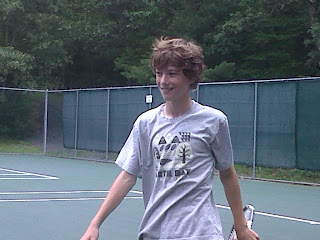 “Hey Buds,” I said casually this morning. “How ‘bout we go out and hit some balls?” I should have known, of course, it’s never quite that simple. You know what happened next—one doesn’t just go hit some balls on those pristine clay courts. One doesn’t slip into a tennis skirt and flat-soled shoes, pull back hair just-so, fill a half-dozen sport bottles with icy H2O, grab the best of last year’s beaten, hollow tennis balls, check the vibration damper on the racquet, and with a ring-less right hand, load the car with all the gear for just a quick drive to the courts to lob the ball around. No, one engages in a bloodthirsty match when one steps on that hard clay.


I told the little man that he had an unfair “advantage.” Mother’s adult-onset asthma was acting up again (what with all this damp weather, indeed, it was!). But he knew the truth, even if he kindly kept it to himself: that unfair “advantage” is a little thing called YOUTH. And when you no longer have it, you realize what an advantage it is. But I never gave this much thought until I got on the court today with my near 13 year old son. We were both a little rusty—my first time, and the little man’s second at tennis since, probably, last September. We approached the court cautiously, chose our sides and began a low-key, friendly rally. Then it happened, one of us (I can’t remember who) suggested a game—a real game. “Oh, you sure?” I asked. “You remember how to score, Bud?” Of course he did; quite precisely, in fact.


It’s a somber day when your kids surpass you, whether on the court, or otherwise physically, athletically, or intellectually (and in my case, that’s pretty much already happened in the math department)—and Lord knows, at times, even emotionally. Yet, any sentimentality is eclipsed by parental pride. It’s what we all want for our children—we want more for them, we want them to meet (and maybe exceed) their potential, reach for their dreams, grab 'em and run, do even better than ourselves. And I’m sure that both of mine will (there’s just no comparison!). But I remember, not so very long ago (well, ok, maybe more like a decade—but what’s a decade in parental years?) when the little man used to refer to those tailed, flying-buckets in the sky as “hop-a-copters,” and red, sirened fire responders as “fly trucks.” I'll remember and keep those toddler days in my heart forever. But those days of toddler neologisms and playing with Tonka trucks are long forgotten by the boy-man, although he'll always have the stories.


“This isn’t the French Open, Big Guy,” I reminded him, as I rifled through my bag for my inhaler, and gulped down the last of the water, grunting to myself: enough already with the drop shots. “You can hit the ball directly to me, you know.” Well, isn’t that the way it’s supposed to work? Oh, I’m supposed to run for the ball? Somehow, that wasn’t such a big deal in the first set, but in my fairly advanced age, stamina plays a serious role in this game, and I didn’t feel much like hoofin’ it anymore—not in this painfully extended set. It was the boy-man's advantage, and the last of the three-set match. His last serve to me was a perfect low slice through the box, which, not even from well behind the service line—not in my wildest dream—could I return.


“That’s game!” I shouted quickly and jubilantly. Game over! Happy to lose! But summer’s just beginning, and if I’m going to keep up with this rapidly budding teen, and the girl-Tween behind him, I’d better get out there and start pounding the pavement; get serious about hitting those balls. I have a feeling I’m going to tire of being whipped; even so, I’ll never tire of that boy-man's joyous look of satisfaction.
Posted by Jayne at 8:48 PM No comments:

I Feel Bad About Everything I Ever Said About Donuts…

… or if I made anyone who ever ingested—or thought about ingesting—a donut feel guilty. Give no attention to any of my remarks regarding National Donut Day (more on that below) for I discovered that there’s a genuine history behind this special day that occurs on the first Friday of June each year: it was born out of the Donut Day event that was created by the Salvation Army in 1938 to honor those women who served donuts to soldiers during World War I. So there it is—a patriotic remembrance of our nation’s First World War. Thank you Dunkin’ Donuts, and Krispy Kremes of the nation for keeping this tradition alive. And to think, all these years past, I could have devoured French crullers and chocolate éclairs guilt free. I’ll be sure to take advantage of it next year; I’ve already plugged the date into my Outlook calendar.

But truthfully, the real reason for my remorse is this morning's Lemon Meringue Pie binge. I can explain: I dreamt about the pie last night—a lemon-aroma-infused twilight illusion. I'm pretty certain I even talked about it. And then I woke, and remembered that a pie, the pie, the lemon meringue pie, was in the fridge. It had been there for a few days, covered by a bag of arugula, had been my daughter’s birthday pie, in fact. But she fancied the oversized Oreo Cookie cupcake, and the pie went neglected but for the sliver I consumed that rainy Thursday evening as we celebrated the little one's big 11. 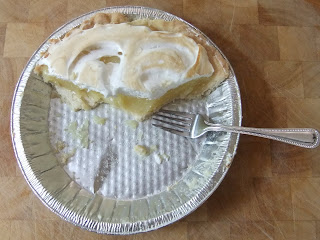 When I opened the fridge (the first thing I always do when I walk into my kitchen) this morning, there it sat, the pungent pie, fate gawking at me, staring me down like a pelican does a fish. I had no choice but to quickly, quietly grab a fork and plunge-dive through the curd and meringue before it could get the best of me. And—fuhyew—as you can see by its remains, it did not. I wish I could credit self-control with preventing me from wiping out the entire lemon meringue species, but I have none, and therefore cannot; however, and thankfully, my throat pouch isn’t nearly as big as a pelicans.

Mind you, this was not a guilt-free all-on attack. Penance is a salad-only dinner (and maybe a few prunes). And I’d love to announce to the world that it won’t ever happen again, but guess what guys?...


August 15th is NATIONAL LEMON MERINGUE PIE DAY!!!
(No kidding, it's one of many American Food Holidays.)
Can you believe this?! Oh yes, it’s on my calendar… one more guilty (or maybe not so guilty) pleasured, lard-laced holiday reserved. I wonder if Dunkin’ Donuts has a lemon meringue pie donut??