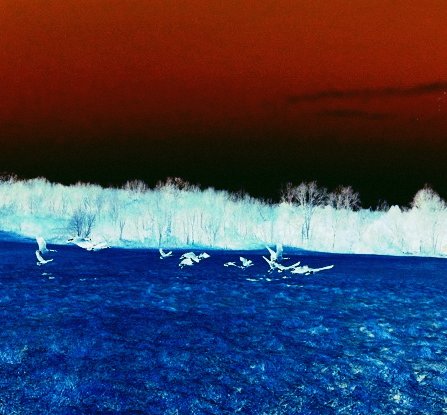 Then came the ice birds, through the bleeding sky, over the undulating, aqua field.  The white forest, frozen in dream, did not hear their trumpeting, nor the crunching upon the crisp ocean as a gaggle landed on its crystal beads.

One eye open and one eye shut, they rested uneasy, gulping the heaving field's abundant air—until impatient and hungry grew the gosling, who cried!

Mother goose took the lead, dew-tipped tails waddled behind, the bleached horizon in the distance pined.

Where the red sky meets the blue plain, dusk and dawn are the very same.

A poem, at times, must be scrutinized, to uncover certain clues—this is what the schoolmaster uttered, his tapered pointer a dancing muse.

Ice birds fixed on the cold, cold ground of the ivory shore as they shuffled in cedilla form
(unlike their innate, accent circonflexe arrays in ruby heavens).

The silver gander considered the graze, and advanced along the inversion, his broad crown alert to what might fill the gizzard.

Somewhere in the sea of brush: berries, sedge and root. (Had he expected fish?) Then came the ice birds, mandibles wide and serrated, pulled up all the grasses, swam along the scrub, filled their bellies with white forest and frozen dream.

TOM WAITS
No one writes more imaginative story/songs/poems (especially the scruffy, down-and-out sort)  than Tom Waits. Loss, lies, love, lowlife, liquor, loners and lullabies, he covers a lot of ground with a mean growl. Only Bukowski (whose influence on Waits is palpable) growled more prolifically. But Waits is the master of pairing poetic story with melody. And his ballads are beautiful.