Friday Night Frolic — The Reservoir at 8:00 am

People create their own questions because they are afraid to look straight. All you have to do is look straight and see the road, and when you see it, don't sit looking at it - walk.
~Ayn Rand 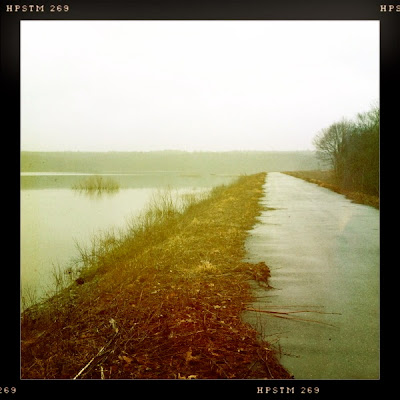 I wasn't supposed to be walking along the paved path this morning, not alone, not at anytime or any day, but I had abandoned my first route—an attempt to reach the falls at the western end of the 252 acre reservoir—when I came nearly face to face with a fox halted on all fours. I noticed his red coat partially hidden by brush and I knew he had been tracking me as I approached his immediate territory. Not wishing to take any chances with a potentially rabid animal, I decided to slowly pivot back east, back through the rain-soaked leaves and muddy trail, back toward my car, the lone car, parked behind a local Masonic lodge. As I retreated I pulled my car keys from my coat pocket and shook them like a noisemaker just to let that fox know who was boss, all the while hoping he wouldn't come at me from behind, not looking back, not once.

There's a small baseball field at the northern end of the lodge's parking lot, backing up along the reservoir, and on the eastern side of the lot stands a chain link fence protecting the water supply. I hadn't before noticed that the reservoir curled around so closely to the field, which I'd been to only once or twice, late spring several years back when the boy used to play ball, long after he had confessed to me, but before he had worked up enough nerve to tell his father—who kept signing him up, spring and fall, year after year—that his heart just didn't connect with the game. Pulling grass and snapping at butterflies in the outfield should have been sign enough, but not to father's of mighty-armed, left handed boys.

[I wondered if it weren't denial (well, of course it was) that kept my husband from noticing what seemed so very obvious to me. I'd grown up with ball players. My dad, who'd coached, let his tomboy daughter (for whom, at the time, no hardball league existed) practice with his team and keep stats. I loved the game as much as my dad and brothers, and I knew when a boy was in love with it too. A boy gently smoothing a stitched, leather-covered hardball in his hands like it were a sacred thing, or stepping into the batter's box, face lowered and serious, as if it were a confessional and he was ready for release. Almighty God, let it go, set me free! There was a level of intimacy with the sport that my son just never felt. And that was okay with me. Eventually—after a mourning spell—it was alright with his father, too.]

With the morning chill and drizzle intensifying, I plodded through the thick brush along the fence at the edge of a cemetery and church bordering the reservoir and found the fence trailed off where the woods opened up beyond the hallowed grounds. At the risk of a $500.00 fine and imprisonment for up to one year, it was there I transgressed and climbed an unobstructed embankment to find a winding, smoothed asphalt path at its crest, surrounding the reservoir. (Damn the electronic surveillance and penalties. Tell me how one turns away from this path?) It was from this perspective that I could see nearly the whole of the reservoir. The view was grace, pure grace. Alone, in the midst of this serene form, I put down the knotty stick that I had picked up along the way, and stood looking at the water, the grey mist rising from it, the leaf-lined path, the evergreen and flora fringe, before freezing the moment with the camera built into my cell phone, its shutter sound effect slicing the moist air.

And then I looked straight ahead and walked.
* * *

Sharon Van Etten is a young singer/songwriting from New Jersey who spent her college years in Tennessee. It was there that she found the music that was to influence her highly personal songwriting. In the past three years she's put out just as many albums, and has found a solid American fan base.

Pitchfork, on Van Etten's debut album, Because I Was In Love:

Most crucial to the album's success, however, is Van Etten's unerring sense for crafting memorable, seductive melodies. Here again she takes no shortcuts, as she largely forgoes standard verse-chorus repetition in favor of a more organic style, with wonderful songs like "For You" and "Holding Out" gently unwinding like the lines across a hand-drawn road map. Even in a folk scene that can sometimes feel over-crowded, Because I Was in Love positions Sharon Van Etten immediately towards the front of the pack.

NPR calls Van Etten "hypnotically complicated." I think she's going to stick around long enough to hypnotize many of us. You can find more on her latest album here.