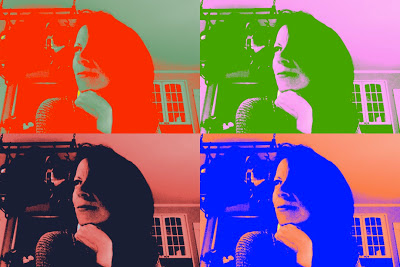 Now that the Suburban Soliloquist has settled in here and vaguely figured out the About Me page she so loathed to write, she's ready to reveal some things about herself. In the event you've been wondering.

The Suburban Soliloquist is a displaced urbanite living in a Providence suburb with her husband and two children. Often, she wants to run away to the city. Or the country. In the fall she is most productive—she hikes and gathers nuts and berries for the colder months. She fiddles with her banjo. It is her favorite time of year. In the winter she happily pulls out her woolens and boots, she skis, makes stews and soups and bakes cupcakes. Come springtime, she is readying her pots with herbs and flowers, and hitting the streets again with four-mile morning walks. In the hot New England summer, she lollygags.

In May of 2010 she began this blog as an exercise in discipline and accountability—not to her career (which is in flux), nor to her children (superflux), nor to her mothering skills (transflux), nor to her diet (fluxatrocious), nor to the damn suburb (nonflux), but to her dream, to the little girl in the  flower-power shirt and striped, bell-bottomed pants who declared many, many, so ungodly many years ago, that she would be a writer.

As a child, the Suburban Soliloquist wrote short stories and corresponded with the Literary Guild. She always received sweet, gentle feedback from the Guild and interesting prompts that kept her scribbling in her notebook. At night, tucked under her bed covers, she read Ray Bradbury with a flashlight and dreamed of faraway magical places. The best of her teachers encouraged her to take notes, to observe the world, to be honest and also critical. She kept a diary. Her friends encouraged her to write letters. In high school, she wrote for the school's newspaper. She kept many pen-pals, and—over the years to come—many, many letters sent in oft decorated envelopes from these pen pals, friends and lovers. (Even the sort that were folded into the shape of a small football and tossed to her from across the classroom.) She especially liked the ones from Jon in ninth grade. He was very funny. He was not a lover. When she can find the time, she may dedicate a blog page to some of these letters. (Not just Jon's.) Don't worry, she'll ask for your permission. If she can find you.

When she graduated from college (where she majored, she thought, in Human Development, Counseling and Family Studies) and was handed her diploma, she was horrified to discover that she had spent four and a half years working toward a B. S. in Home Economics. (Oh! That was the College of Human Development, Counseling and Family Studies.) She admits this discovery, here, for the first time. On paper, she says she has a B.S. in Human Services—which may very well be the same thing as H.E., or not. What the heck is Home Economics, anyway? Really, she's so old now it doesn't matter what the hell she majored in.

In New York City, she completed graduate work in legal studies and waited tables at a swanky, South Street Seaport restaurant. She was its worst waitress ever. (Her prior wait experience consisted of serving roast beef sandwiches at a local lunch barn, and flipping hash browns at a greasy-spoon breakfast joint. She may have embellished her table-waiting background.) She stopped writing altogether. Except for legal jargon.

During her years in Boston she worked for two large law firms, a growing retailer, an expanding restaurant business, and a commercial real estate owner/developer/manager.

Despite the fact that she got sidetracked by other business, the desire to play with words never left her. For the past several years she has taken many writing classes (fiction, non-fiction, creative, humor, memoir, poetry) with the Continuing Studies program at Brown University. She completed two classes in the M.A. English/Creative Writing program at Rhode Island College as a conspicuously old,  non-matriculated graduate student. She has written for an online magazine as a Parenting Teens specialist, but quickly decided that parenting teens was not something she wanted to recreate on paper. At least not in an expository way. (Besides, can anyone truly claim to be a parenting teens specialist?)

Most recently, the Suburban Soliloquist has embarked on a new journey with Bennington College, where she is working toward her MFA in writing and literature (and she's pretty sure that, this time, there will not be any graduation surprises). With any luck she will receive her MFA from the Bennington Writing Seminars in January, 2015.

No, wait. She's changed her mind. Except for the editing part, below.

She will likely, on occasion, edit this page. (She has, indeed, several times.)

She's on hiatus, excepting an occasional post, here and there, until 2015. (Or some other undetermined date.)

She is grateful you poked in here and took the time to read her bio. Feel free to contact her at: suburbansoliloquist at gmail dot com.

For more information about this blog, see About This Blog...