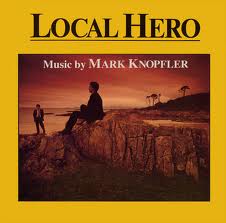 It's snowing again, and the wind stirs the crystal confection into dramatic peaks against the sliding glass door, like the thick froth of the steamed milk in my cappuccino, only colder. I don't know why, but all this wintry weather and snow drifting makes me think of the ocean and its undulating waves. Peaceful, calm. Perhaps it's just longing for a warmer atmosphere (even though I do love the winter).

Which brings me to the movie, Local Hero (1983). I don't mean to push soundtracks here—after all it's Friday night, and this is a Frolic, your supposed to be out whooping it up, shaking your derrière—but with this weather keeping me (and the kids) hemmed in at home, movies are on the forefront. There's only so much homework and projects and reading one can do.

So I return to Local Hero, which is another one of those films in which the soundtrack (Mark Knopfler—need I say more?) outsold the film. The movie's instrumental theme song, Going Home (as well as the other scores), is a stunning, emotional and mellifluous piece of work by Knopfler. In this case, however, the movie is every bit as good as the soundtrack. This film is a favorite of mine, it speaks to humanity in the simplest way. Its premise: big Corporate trying to swallow up small, Scottish coastal town for its own gain. But what follows is extraordinary, in a very ordinary way. Ordinary characters doing ordinary things. With all this ordinariness it may seem not worth your while. But it is. The film is pointed, quirky and endearing. The humor, subtle, dry and wry. And Knopfler's accompanying music makes it hard to keep the eyes dry.

I won't give it all away, in the event you haven't seen it. I'll say only that it's about change, how our experiences—which need not be profound—change and transform us. And it has one of the sweetest bar scenes of all time ("I'll make a good Gordon, Gordon"). I've watched this story often over the years, and each time I discover within it something new.


This gem of a move and Knopfler's orchestration are so worth Going Home for.
Posted by Jayne at 4:06 PM