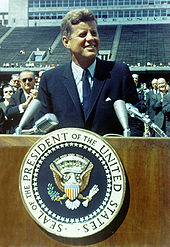 "Ask not what your country can do for you - ask what you can do for your country".
I was only a few months old when John F. Kennedy spoke these words, but they've stayed with me, and my generation, for a lifetime. Speaking of the evils of the world, terrorism, and looming annihilation during an inordinately turbulent time, JFK delivered his address with eloquence and astonishing optimism.
The above excerpt is likely the most remembered and oft quoted part of Kennedy's pivotal Inaugural Address. However, sacrifice is not what most of us want to hear about right now. Seems like we've been doing it for too long. We're ready for our country to start doing for us.
But Kennedy's speech wasn't purely rhetoric, he was referring to centralized government, with the intent being to empower people—he was telling us, the new generation, not the government, to take it upon ourselves to rid the country and the world of man's common enemies.
A couple of days ago, Nance wrote this on her blog (regarding gun control):  "Significant issues will disappear only if we allow them to." She couldn't be more right.
"So let us begin anew—remembering on both sides that civility is not a sign of weakness, and sincerity is always subject to proof. Let us never negotiate out of fear. But let us never fear to negotiate." ~ JFK
Tonight, in Washington—at the Kennedy Center for the Performing Arts—as part of The Presidency of John F. Kennedy: A 50th Anniversary Celebration, cellist Yo-Yo Ma will perform a tribute to the Pablo Casals Concert in the Kennedy White House (which was given after a state dinner by the famous Spanish cellist, Casals, in 1961). It is sure to be a stunning performance.
"Let the word go forth from this time and place, to friend and foe alike, that the torch has been passed to a new generation of Americans..."
~JFK
Posted by Jayne at 1:11 PM