On Nudging and Scrapping the Superfluous 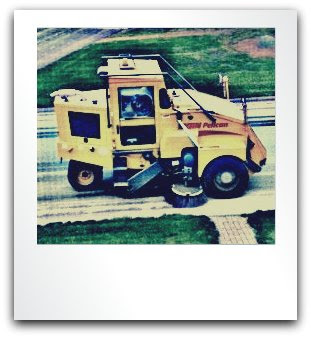 Speaking of lost baubles, this is the the fate to which one pearl could have been called: A sweeping Dyson-on-steroids; which may be, in fact, the fate of many a bibelot. I wonder what trifles fall from its colossal canister at the end of the day. Rings, bracelets, wallets, cuff links, homework instructions, sling-shots, super balls, mouth guards, coins, keys, whistles and perhaps, even, a phone or two.

I think it's the time of year.

Springtime, it seems, not only summons our inherent need to clean house, to rid ourselves of overflow and redundancy, to make everything sparkle anew, but also rouses a more nuanced, or unconscious, impulse to shed layers of constraint, free ourselves of ties and responsibility. Scrap the superfluous.

What I'm hoping won't trend: Left atop his fathers car, Max's cell phone was lost to a zephyr. (Or was it to absentmindedness?) Though, to his credit, he'd trained his phone to be as blithe as he—refusing to part with its view from the rooftop, the LG Cosmos succumbed to great forces only after its mile-long joy ride down the highway.

If I could only say with more certainty what happened to mine. I know only that this past Sunday, while out with Lulu, miPhone was lost somewhere between the myrtle fields bordering the pebbly coastline of southern Rhode Island and the high tension tar-carpeted strip of commerce somewhere in the middle of the state, an area of which I have little familiarity. A frenzied hour of backtracking, mad dashes through mall stores, phone calls to coffee and dress shops, proved futile. (I blame this unusual circumstance on a poor night's sleep and a too early lacrosse game.)

...turns out this family is not good at hunting down phones.

The same Sunday, along the same tar-carpeted strip somewhere in the middle of the state, a well-trained and darling girl at the Verizon store took me for a dizzying walk through my options. I don't remember how we arrived from one place to the other, but when we finally came to a pause by the hardware, the girl, having placed a series of phones across the counter, waited for my response. And all I could think, my mind a pasty white of garbled thought—my schedule, my contacts, my music, my photos, my flashlight, my whole life, everything, encrypted into this vanished phone—all I could think was: What did the fortune say? It had been sitting on the windowsill above the kitchen sink for the past week. What did it say? When the moment comes, take the last one from the left. I had pondered this ordinance all week. Scrubbing pots, loading, unloading the dishwasher... take the last one from the left.

Well? the girl nudged me.

I took the pricier one on the left. It came with a personal assistant known as Siri, and I thought, at this juncture, it would be wise to keep a PA in my pocket. Lu and I left the store, returned to the parking lot along the tar-carpeted strip somewhere in the middle of the state, and having no GPS but a new PA, we consulted with the well-paid Siri before backing out onto the road. Lu, asking: Siri, how do we get home from here?

And Siri, in her monotone chest voice, answering: I don't know where your home is. In fact, I don't know anything about you.

(I think, maybe, I misinterpreted take the last one from the left.)

This week, Siri and I are getting acquainted. I'm learning about iClouds and syncing and the gravity of a little sham known as phone insurance. The thing to which we must all submit, for if we fail to do so, if Siri—my bibelot—is sucked into a black hole by the vacuous crazed brush of a Dyson-on-steriods, and she is entirely uninsured, her replacement cost will be more than three times as much as her retail cost.

What happened to the days of plain paper maps?

And wood-framed, phone-cradling, glass boxes on the side of the road?

I am being nudged...

Perhaps what I should do is leave the last one from the left.

This week, and last, I've been nudged into a series of events that are keeping me from communicating with many of you. My map's in hand, though, I'm navigating through the snarl, and will hopefully find a return to the normal (?) within the next week.

Thanks to the sharp-eyed Rubye of Rubye Jack, and to David, one of my favorite Brits in the USA, for gifting to me the Kreativ Blogger Award. I've affixed it, with much appreciation, to the sidebar. :)

Email ThisBlogThis!Share to TwitterShare to FacebookShare to Pinterest
Labels: brilliant moments, It wasn't like this when I was growing up, migraine, Stress, Thanks