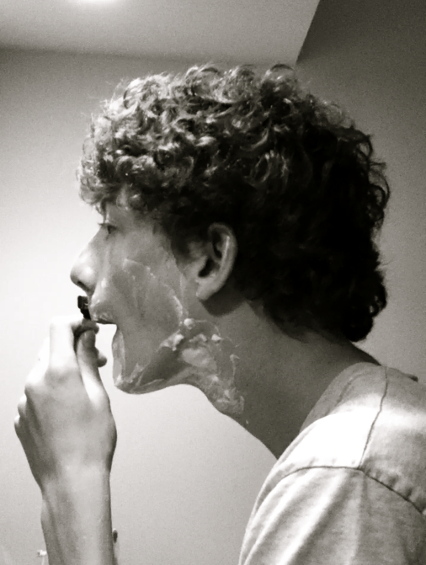 We've reached a milestone here. And isn't he a sport to have permitted his mother to capture the whole ceremonious first slice of silver across the creamy, pale skin of his face? She won't, however, post the video.

This Friday's Frolic is going to be highly abridged as the Suburban Soliloquist has been strapped to her chair all week, working on a feature article (what is that anyway?) which she may or may not post on this blog, depending upon how it all unravels. (At the moment, it is way too long for a blog post.) For some reason, as apolitical as she is, she's been inexplicably drawn to a major controversy that has cast national attention on the city in which she grew up. And it's not the fact that the city is near bankrupt.

In any event, she hasn't been on the internet much, other than for research reasons, but hopes to return early next week for a proper posting and jaunt around the blogging community.

In the meantime, a little video sent by friend-of-the-shut-in:


For more information on the talented harpist Frédéric Yonnet visit his website, or listen to his interview over at NPR.

Have a beautiful weekend. Maybe the sun will come out tomorrow?

(Is that really her baby?)