Friday Night Frolic — In Which Mr. Sawyer Forwards a Letter 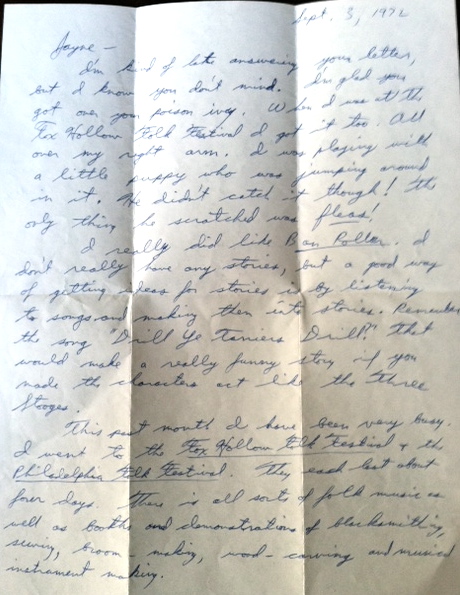 Do to various commitments, and, to a lesser degree, technical glitches, the Suburban Soliloquist is unable to bring to you the regularly scheduled Friday Night Frolic. In lieu of this tragic turn of events, she offers you something, with relevance, found just this morning in a soggy box: proof positive the power of a teacher's charitable words to a then eleven-year-old wanna-be writer. Kindly note the second paragraph of the above letter, in which her fifth grade teacher, Mr. Walter Sawyer (of whom she's made past mention) replies to a letter and short story she sent to him the summer of 1972:

"I really did like Ban Rollon. I don't really have any stories, but a good way of getting ideas for stories is by listening to songs and making them into stories. Remember the song 'Drill Ye Tarriers Drill?' That would make a really funny story if you made the characters act like the Three Stooges."

And so you see, dear reader, Friday Night Frolics' seeds were apparently planted many, many moons ago. The Suburban Soliloquist doubts she has a copy of Ban Rollon, but she has a suspicion that it may have been sparked by this (remember In-A-Gadda-Da-Vida?):


The letter's flip side offers a sweet sign off and a joke that no pre-teen would appreciate today: 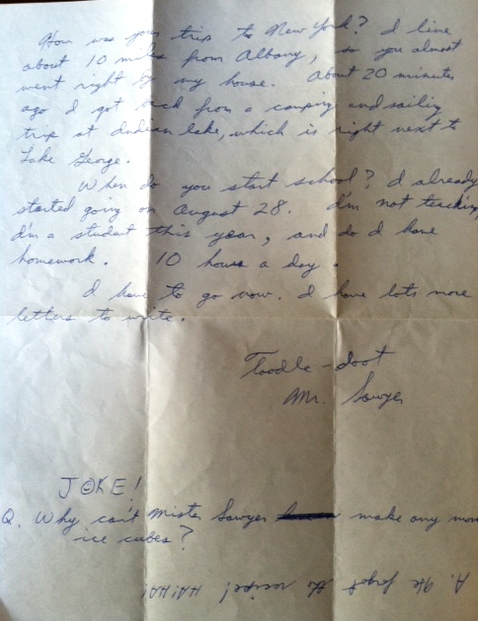 So there it is: evidence from where the Frolic first took roots.

The Suburban Soliloquist remembers Mr. Sawyer as not only an inspiring teacher, but also as pretty darn cool (the Fox Hollow Folk Festival and the Philadelphia Folk Festival in one month?).

Many thanks from the bottom of the Suburban Soliloquist's heart to Mr. Sawyer for taking the time to write and humor the skinny kid with big dreams. It took a long time for the seeds to germinate (maybe the soil was too heavy or dry or not well fertilized, or the seeds were slow growing and the farmer impatient), but they've sprouted, the crop's maturing and she's getting around to the harvest.


Every morning, seven o'clock
There's twenty Irishmen a pounding on a rock
The boss man says, "Shut up, keep still...
Come down heavy on your cast iron drill."

The big boss man, he down to the ground
Married a lady 'bout six feet 'round
She bakes his bread, she bakes it well
She bakes it harder than the nobs of Hell.

The foreman, name of John McCann
Swear I never met a meaner man
A premature blast went off
And a mile in the air goes big Jim Goff.

The next payday she come around
A dollar light poor Jimmy found
"John, what for?" comes this reply
"You're docked for the hour you was up in the sky."

Tarriers live on work and sweat
There ain't no tarrier, got rich yet
Sleep and work, and work some more
And drill right down to the devil's door."

There I stand me hat in hand
With two trains kissing in the Utah sand
There's no one now, who knows my name
An Irish derby is me claim to fame
Posted by Jayne at 7:18 PM