The Lopside of My Brain


How is it I've come to Wednesday without a single word in my notebook?

Probably because the thoughts that formulate the words (or is it the other way around?) are nebulous. Scrambled. Unreliable. Capricious.

What I've been pondering is most likely the same as what others have been: the death of Osama bin Laden.

And my jumbled and gloomy thoughts.

We did it! heard round the world. Americans grandstanding.

Saturday night I had wondered if my son had worn his golf shirt to the Spirit of Washington cruise on the Potomac. Sunday, May 1st, at 11:00pm in the parking lot of the school Max attends—waiting for the airport bus shuttle to drop Max and his classmates—I listened to a NPR reporter break news that the U.S. had killed the al-Quaeda leader.

But what does this mean for our country? I wondered. What does it mean in terms of concluding a Middle East war that began nearly ten years ago? Why now? What took so long?

For some obscure reason in my lopsided brain, I didn't feel jubilant. I felt pensive and lugubrious. As if the killing were anticlimactic, a gesture. Bin Laden had become nothing more than a symbol, a ring-leader of who-knows-how-many-worldwide-free-roaming-terrorists. Then again, had he any power at all—cowering in caves, holed up in ramshackle hideaways?

Then, more news. Contradictions in news. He was armed. He was not... U.S. Senators say they saw a dead bin Laden photo. Then they said they did not.

What does it matter?

We executed him! A single shot to the head, it is said. A hole-in-one.

The massive outward expression of victory, the street dancing, I know, is beside the point. We all have our ways. While I didn't crack open a bottle of fizzy, I'm exhilarated that we can now move on. I'm happy that we are minus one terrorist. One fanatic. I'm happy that the death of bin Laden brings comfort and some sense of closure for those who lost loved ones on September 11, 2001, as if this loss can ever be closed. But I'm sad for the world. I'm sad for what all of this—9/11, the war, the execution, the residuals—says about mankind, human nature.

An eye for an eye!

Did my son wear his golf shirt? He didn't. I knew he wouldn't, but I packed it anyway. I wouldn't have thought to pack it if it weren't for this conversation. And as more news unfolded this week, I came upon this headline from msnbc.com: Obama's Golf Shoes a Clue to Bin Laden Raid. Golf shoes.

And the ramshackle mansion in which bin Laden had stowed himself was a walk away from the Abottabad Golf Course. Golf course. 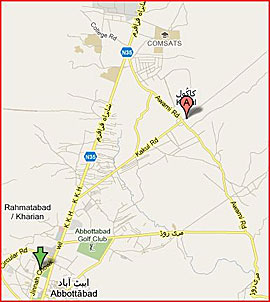 Did I say (just one week ago) that I don't believe that coincidence is just coincidence? That the World conspires?

Email ThisBlogThis!Share to TwitterShare to FacebookShare to Pinterest
Labels: It wasn't like this when I was growing up, the meaning of life, war