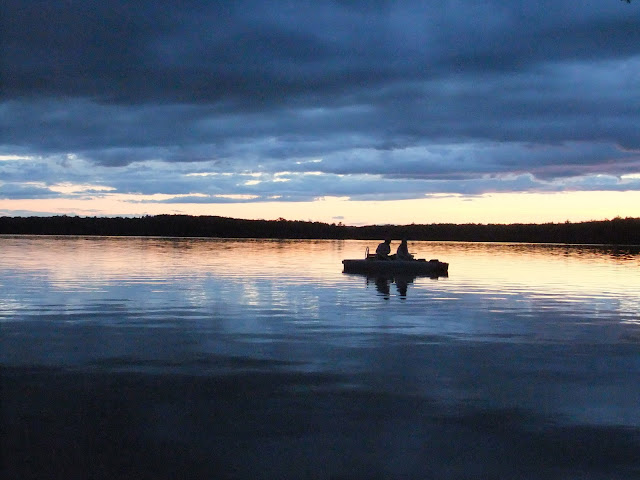 A week spent by the lake in a thirty-five square mile town inhabited by roughly one thousand people in Penobscot County, Maine can be wholly rejuvenating. Or not. To tell the truth, I'm not quite sure yet—being just back from the bivouac.

I have a large family, but only eight of us were at the lakeside home my father built. I did relax, at times. At other times, I drank too much wine. Or got pink with too much sun. I had some vivid and strange dreams. We played mad horseshoes and Texas hold 'em. I read The Old Man and the Sea out loud to the children (now that's a book that really ought to be read aloud, even if only to oneself). And my daughter, from the floating dock, had her own Santiago/marlin moment. Only her big fish turned out to be a rock.

The lake is absent a portal to the virtual world other than a spotty Verizon signal on my smartphone—a rather old smart phone, which seems to have lost some of its smartness—though I managed to post a few stippled, mildly smart smartphone photographs to my Facebook wall. Like the painted indigo skies and shimmery coralline waters of the early evening lake and such.

I didn't open my laptop.

And I wrote a poem. A failure of a poem. But this is how all writing starts: as a ruddy failure.

I also watched a lot of this: 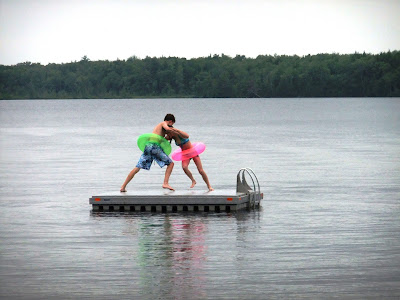 So, rather than write, which I find difficult to do unless I'm alone, I decided to focus on the banjo (an instrument I've been slowly learning to play since I featured this talented woman back in March). I followed Wernick's instructions and practiced right-hand rolls and slides, worked on three-finger banjo picking, and took a break from the frail. And while writing this post and researching Wernick/Dr. Banjo I unearthed some startling information: Wernick is a survivor of a horrific 1989 plane crash in which a little more than one-third of the 296 passengers and crew were killed. That he—or anyone else—was able to walk away from the catastrophe is not a minor miracle. And once again, here, I find myself writing about planes—a subject that prompts bitty seeds of sweat to articulate along the frons.

(It wasn't always like this, me and aerophobia. As a young professional I was often air bound. Only after both of my children were born did I become panicky at the thought of flying. But I do it. If I must.)

Later that same day—the day United Airlines Flight 232 went down hard, fracturing into several pieces and somersaulting into a blazing crimson orb in Sioux City, Iowa—Wernick, along with his wife and son, boarded another flight to his destination: a music festival in Albany, NY. That is a dedicated banjoist. Werner later wrote an unrecorded song about the tragedy.

Here, you will find Werner picking away at Foggy Mountain Breakdown with Steve Martin and Earl Scruggs. On Martin's Grammy Award-winning The Crow: New Songs for the Five-String Banjo, Werner played on two songs, having co-written one of them with Martin.

But Wernick and Martin, established and well recognized banjoists, are not who I'm showcasing today (though they're both certainly showcase-worthy) because it's come to my attention that I've been featuring a succession of male musicians. Meaning it's high time to make some room for the ladies:

Red Molly is a New York based folk/bluegrass force. But as the Boston Globe reported last year:


"Red Molly may be from New York, but their bluegrass and old-time gospel sounds and buoyant three-part harmonies are so down-home it's as if their notes are carried to you on the crisp air of the Ozarks."

The rosy trio is currently on a yearlong nationwide tour. You can find their schedule on their website. Here, their newest band member, Molly Venter, is introduced:

Strumming the banjo, dreaming of playing it as well as these ladies, and back to my laptop's keyboard, now, I feel rejuvenated and as buoyant as a pinkened hyaline floaty.
Posted by Jayne at 4:37 PM