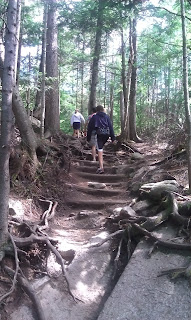 I know why Backwoods Betty left the city. Though this, I did not always know. Nor was I certain it was a good idea—Betty being a cityfied professional for nearly three decades, held captive by the city's assiduous urban hum, it's vibrant sheen, culture and diversity—I was worried, couldn't imagine how she'd negotiate the solitude of the mountains and northern boreal forests, the frigid and often dangerous winters, the slowed pace. As a second home, sure, but on a permanent basis?

But North of Franconia Notch is hardly an isolated, unfriendly or stagnant plateau. It is a series of verdant mezzanines, palisades of evergreens and brush, pillars of granite and peppery stones that line its natural corridors and wrap around its lush and coniferous woodlands. There, in the thick of this mountainous weald, it is to breathe crisp air and listen.

It is to be spoken to by a voice rooted deep in earth's core, an oracle.

It is to be in the company of good friends. Like the croaking bullfrogs at dusk.

Sunday morning we hiked Falling Waters. Here, along this rugged, root covered, stone lined trail, worn by the tread of many a trekking shoe, insulated from flurry and fuss, from what can sometimes feel like the madness of the world, we heard water falling: drips of clear liquid dropping from one green leaf to another, like Mother Nature's tears running down a stairway of foliage. Then, a trickle of water from behind slate and golden rocks, around fallen birch limbs, and quietly through the brook. 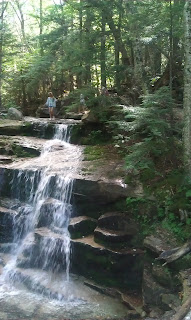 It is a conversation, accompanied by a lullaby.

Without television, radio or internet for the entire weekend, on Sunday we were still unaware of the events that had unfolded in Oslo, and Utoya. We climbed, quite blissfully, higher up the steep and sometimes muddy trail, and witnessed a different kind of unfolding: cool water plunging down granite steps. Pulling ourselves skyward, past sharp twists in the terrain, through shallow pools of water and up stone risers set by the AMC, the waterway widened and gushed from enormous slabs of stone into cascades of trilling aqua.

It is a melody.

We rested at the top of one of the largest falls, and absorbed the deep pigment of nature, whistling birds, barreling water, buzzing insects, pine and dirt and rock, the organic lyrics of the mossy forest.

It is a symphony. 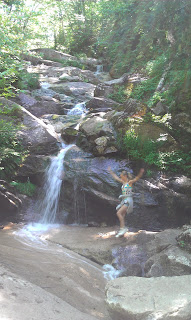 Not knowing anything but the rich sounds of tall pines, clods of mud under foot, wild geese, bullfrogs, or fanning falls can be bliss. (It was Walt Whitman who said:  You must not know too much or be too precise or scientific about birds and trees and flowers and watercraft; a certain free-margin, and even vagueness - ignorance, credulity - helps your enjoyment of these things.)

It is a meditation on quality of life.

It is a libretto of life. And death. And renewal.

We went up and down the trail unfettered by the knowledge of the chaos and killing in Norway. The whole weekend, unfettered. It's hard to believe. Some things we don't want to know. Some things we most certainly will never understand.

At the base of the trail, turning on the radio, it was a requiem.

I didn't want to leave.

Thomas Dybdahl is a Norwegian Grammy Award winning singer/songwriter. His music has all the serenity and lushness of a stream rippling through mountain gorges. His voice: undulating waves of light and sound. His lyrics: as colorful and emotional as the deep northern forest, flooded with the steamy warmth of southern everglades. The sound: rooted in pop, its branches having a multidirectional spread to folk, rock, country, jazz—it is as melodic, scenic and pristine as the glacial terrain and falling waters that seduce us, that speak to us.

His new album, Songs, was released this month in the U.S.

This week, Dybdahl has been touring the States, dedicating his shows to his Norwegian countrymen. Next week, he returns to Trondheim and the tears of Norway. There, he's sure to bring much comfort.


(In the background, Norwegian philosopher Arne Næss speaks of quality of life by asking, roughly, how it may be defined and how it may remain high or become heightened? He reminds us that quality of life has nothing to do with what one has, but how one feels about oneself, what brings one joy. Næss is well known for his work on the principles of deep ecology. )


I worry no longer. Betty knows exactly what she's doing, and she's doing it well. There, in the backwoods of New Hampshire, is much joy and peace. I wish it were the same the world wide.


"In every walk with nature one receives more than he seeks."
~ John Muir
Posted by Jayne at 4:14 PM