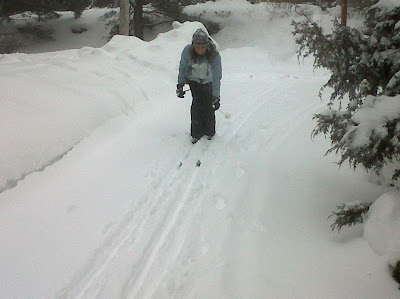 I don't know why, but I have a distinct feeling something is coded in the snow's weekly plummet to earth. It may be global warming, the shift in climate, or just my wild imagination, but the downfall occurs with such regularity of late that I sense there's more to it. So I got out in it, in search of it's meaning.

The heavy fall began near rush hour this morning, but no school delay was called. Rather than have to make up yet another day lost to snow, school officials opted for an early dismissal. Thus, I had a porthole in which to voyage solo aloft the glistening, fleecy ground cover.

There is something about getting out on my cross country skis, alone, scraping through fresh snow, cutting a trail, that awakens me. There is an immediate peace, an instant sense of becoming one with nature. And even though my trek was along suburban streets, it was still for some time quiet but for the Song Sparrows' trills from across the partly iced-over brook. I wondered if this were not the message—the snow, and the birds, warbling in harmony just for me (skiing the flats has this effect, delusions surface, and I can see crystal clear beyond the horizon)—a dawning of a virginal earth, unstained by human nature.

Until the snow plow hammered past, leaving noxious fume in its path, returning me to Earth present.

(When I return home nearly two hours later, I am to find via research that people have been cross country skiing since prehistoric times—meaning since human beings first appeared on Earth—along the Baltic Shield. That's right, snow has never immobilized Scandinavians. And the repetitive motion of my skis are the same as earliest man's. This makes me feel even more like a snow goddess. Khione. I am she.)

Presently, I make my way along Rawson, down a small decline, and onto a flat with a certain cadence: a slightly bent leg out front,  the back one in a deeper bend at the knee, dragging behind. I let it linger there until I can glide no more, and then thrust the back leg forward, and the other falls behind. The arms—poles in hand—do what the leg does opposite, and the method is repeated until I reach a soft coast.

I glide past homes where large icicles cling precariously to rooflines, azalia bushes are buried in white fluff, the rims of basketball hoops are salted like margaritas, and a small trampoline looks like a snow cone. I see a "land clearing" sign, and I feel a wisp of sadness. 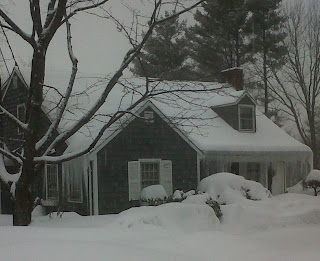 No one, except for a few cars passing slowly, is on the road but me. I am alone, keeping my own pace, no one to catch up to, no one to wait for. I've got a rhythm going, and it feels good. I feel it's all I really need. But then I see the hill ahead, and my heart rushes. I hurry up the incline, suddenly aware that I want to get to the top. I am in full stretch because I need to get to the top.

Because I need to go down.

And so I reach the crest and circle round, adjusting myself at the top, peering down to the bridge, where I know my downhill coast will come to a halt. I dig my poles into the snow under me, and push off. A joyful scream erupts (I am not even conscious of this) as I careen down the small slope, pass over a stream and arrive atop the bridge, where my stride is broken. 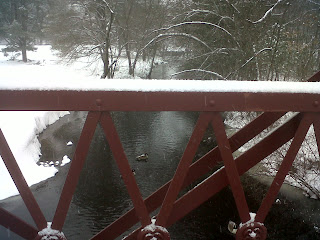 I do this three more times. It is like a drug. A selective-serotonin reuptake inhibitor.

On my final descent, a car passes and I notice it's a neighbor bringing her daughter home from school. They smile and wave. Another car passes, and it's also a mother and child. I begin to feel guilty for not picking my kids up at school. I begin to wonder if I don't live for my kids. But I don't live for my kids, I realize. Is this a horrible thing to discover? Is this the message? Wait, maybe I'm not thinking straight. I live with my kids. I feed them and clothe them, and give them everything they need. Is this not enough?! Why, I do live for my kids, don't I? I am confused. I begin to think that I mustn't love my kids amply, for if I did, I'd be fetching them at school. I begin to feel less like a goddess, and—gripping my poles—more like something that is horned, tailed, and wields a pitchfork. This is the message, I decide. I need to get off my drugs and return to the real earth. Or perhaps I need a different drug. Something more like Xanax.

I leave the mountain and head toward the flats again. I turn down a side street in Arnold Mills and ski past the pond. More cars drive by. It's odd, but I think that one can tell a lot about a person simply by observing his or her reaction—especially to that of witnessing one skiing on a snow covered street. There is snow. Lots of it. I’m not on blacktop for Heaven's sake. So I can’t help but wonder why some people seem so puzzled. Or annoyed. Or doubtful. While others grin gaily. 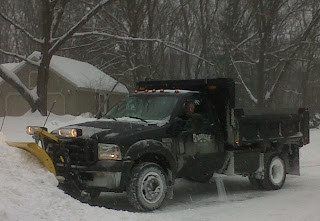 And then there is the snow plow and its driver, whom doesn't care much for me. Not at all. Nor I for him. Not at all.

Alas, my son is soon to be jettisoned from a big yellow clunker, so I slide back toward home and wait by the the street corner's snowbank—my journey complete, though no portent had been decoded. Or had it?

At the corner, I greet the little man, who seems no worse for the wear. He doesn't mention the extended ride, or the fact that other children were picked up at school. I wonder if my daughter will feel the same way. 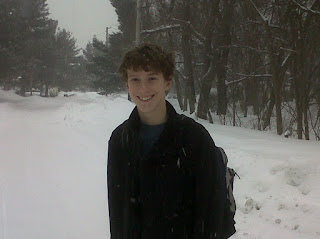 I wonder if I'll be going out for another winter hike when she returns home. I wonder when we shall see the next snowfall.
Posted by Jayne at 6:53 PM