Zen in the Art of Life 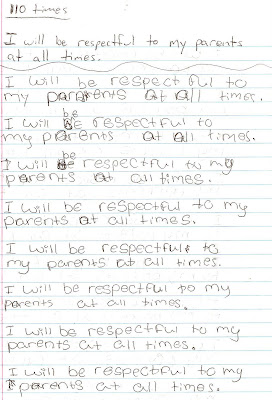 I don't remember the infraction, but she did follow the directive and wrote the sentence 110 times—the extra ten for good measure. Sometimes you have to do a thing that many times for it to sink in. (If you're really lucky, you don't.) It was an effective consequence. For a while. But as it is, my little muse will be who she will be. And it's alright. As we all do, the girl sometimes forgets.

I've been told that I'm forgetting my children. This by my children, of course. They seem to think they've been lost to my laptop. I don't think it's true. The culprit is my mind, and its incessant swoosh of words and phrases that pull me inward and freeze me in time. I need to rectify it, obviously. And though the kids are secure in my love for them, they also need to know that they have my respect.

And I'd like to show them this without writing it out longhand 110 times.

So this being school vacation week, I'm going to be taking a little hiatus, take my kids to the movies, cook some real meals for them, play some board games, and head up north, to the mountains, where we can shoot down the trails to our hearts' desire.

It was Ray Bradbury who said that one of the most important items in a writers makeup, what shapes his material and rushes him along the road, is to look to his zest, see to his gusto.*

Time to look to, and create, some of that zest and gusto with my babes.

I'll be back, though, for the Frolic on Friday. Until then, with much zest and gusto: So long and be well!

*Zen in the Art of Writing by Ray Bradbury
Posted by Jayne at 6:32 PM