The Little Team That Did 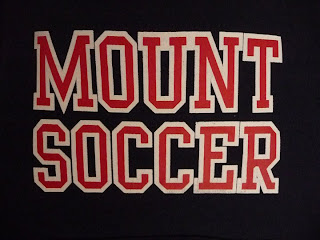 Sports is not a topic I often write about, as I am woefully unqualified to do so. But, with both of my kids now involved in middle school athletics, these past few months have been a whirlwind of sports related activity, an opportunity for me to act as enthusiastic spectator (soccer), as well as assistant coach (cross-country). Even so, I must further preface: I know—aside from a permanent reminder of the game in a place where the sun doesn't shine—diddly about soccer.

Couldn't tell an offside from a dangerous play.

Brackets?  Finally figured them out! And here's what they looked like yesterday:

Last night, I watched our team, Mount Saint Charles Academy—the team I affectionately, secretly, referred to as The Little Team That Could—lose the state championship to a formidable opponent. While admittedly (at least statistically and by physical stature) Mount seemed the underdog, one still hoped for that "you never can tell" moment. The moment where the little guy, wide open, grabs the assist and charges to the net. It was not to be. Archie R. Cole Middle School in East Greenwich scored the only goal of the night with a header. It's not easy to keep that kind of ball out of the goal.

But hey, there they were—the boys (our boys, an exceptional bunch), an assembly of seventh and eighth graders from different towns, even states, their first season together, their coach an ancient (but apt) priest, a final night on the astroturf, under beaming lights and freezing temps, wind howling in the tear-streaked sky, performing war chants, looking... well, cold. And ready.

The other boys? Large and rugged, with a perfect record. Also ready.

I was sitting on the wet, metal bleachers—wishing I had a nip bottle or valium—not ready.

Well, you already know how it ends, so no need for further detail. Except to say, that The Little Team That Could stood proud at the Final, and their loss last night could not diminish their many accomplishments over the season. The fact that they were sandwiched in those brackets spoke volumes to superior coaching, hard work, team spirit, dedication, and remarkable camaraderie.

To Fr. Charlie, his assistant "Mrs. Coach", and the boys: it really isn't whether you win or lose, is it? Sure, some glory is good, but you know it's really all about—as they say—how you play the game. I know you know this. You left the field glowing. Tired, wet and cold, but glowing. And no longer The Little Team That Could. No, no. What you had become was something much more, something very impressive:  The Little Team That Did.  Glory, Glory, Alleluia.
Posted by Jayne at 3:46 PM