On Capturing the Surreal 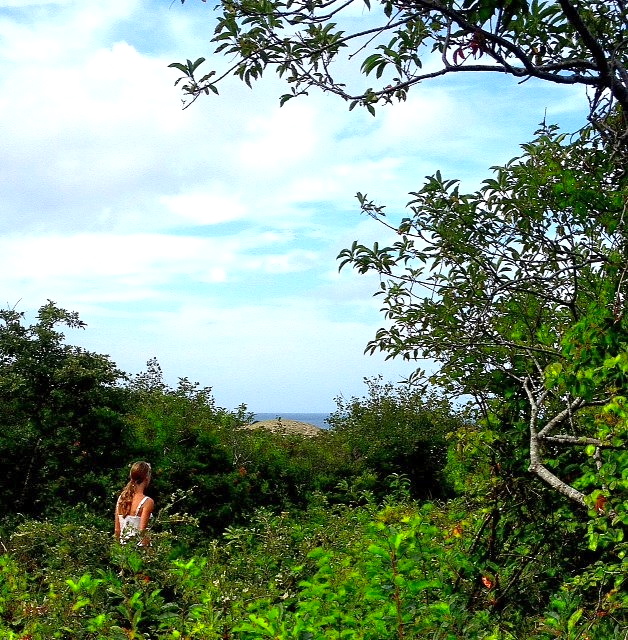 It was like this. Surreal. The Outer Cape. Come Saturday morning there were barely a dozen bodies on the beach. No. Twelve exactly. I counted. There had been an electrical storm the night before, morning was grey, but by 9:30 AM the clouds were beginning to slowly disperse southeast over the Atlantic. At 10:30 AM, lunch in backpacks, we mounted our bikes and peddled along the sandy, narrow road, following the deep grooves of wide tire treads set in clay. At the top of the wooded hill, we could barely see the ocean but we heard it like we hear, from a mile away, the soft hum of a highway during rush hour. The pine-covered path that wound down, in serpentine fashion, took us through tall, dancing oaks and merry, berried bushes and out to a paved road leading to the ocean. Lulu piloted the way.

Surreal. The Outer Cape. Nearly every day (and on a few days, very soon after the storms cleared), in northern Wellfleet, abutting Truro, we set our low chairs, blanket and small cooler along the wide expanse of Newcomb Hollow Beach, where the forest, gushing out to sea, falls off in a dramatic one-hundred foot sand plunge, and its rosehip, bearberry and boulder strewn dunes tell a marly, striated history of life along the coastline. (These are the great dunes that Henry David Thoreau called "the backbone of the Cape.") Vegetation clings perilously to the edges of these sand banks, and at the foot of the fallen earth lie injured, traumatized, forest scrub.  It was on this beach, before the inexhaustible sea, that I read to my husband, from Thoreau's Cape Cod, "The breakers looked like droves of a thousand wild horses rushing to the shore, with their white manes streaming far behind; and when at length the sun shown for a moment, their manes were rainbow tinted." To which he, eyes still fixed on Richard Zacks's The Pirate Hunter, replied: Wow. Is that ever overwritten. (Which makes me wonder, now, if I am doing the same.) But the breakers, the gurgling white breakers, from a certain angle, did look like the streaming manes of a thousand wild horses rushing to the shore.

At least to me.

It was on this beach, too, where little terns scattered and herds of seals bobbed in the aqua froth, that Max ran barefoot every day--straight into Truro, along deserted ivory sands, way, way out of our sight. On one such run, as Lu and I ate lunch, I became aware that Max had been gone a long time. Too long. And I had grown concerned. Almost an hour into his run, my phone rang. It was Max. Mom, he said, Mom! And then, the phone cut out. Now, I was more than concerned. I tried reaching him several times, but there was no reception. (On the outer Cape, the valleys and hollows, including the shoreline, are almost entirely dead zones.) Moments later my phone rang again. Max had climbed one of the steep sand slopes--the only spot in which he could find a smidgen of cell phone reception. Immediately I asked if he was OK.

Yes! he hollered into the phone. But there's a seal! A beached seal, and I don't want him to die. I've been cupping water in my hands and tossing it over him to keep him hydrated.

What? Max hun, I explained, seals don't get beached. They're not whales--it's normal for them to come on shore. They can scoot back into the water. He's probably just resting.

Yes, but he's bleeding. His flippers are torn up. He said, too, that he was the only person on the beach. No one else in sight. Which is the way it is in lower Truro, where few roads lead directly to the coastline.

This boy. Kind heart. I felt his worry. (He is the boy who, once, as a four-year-old, eyeing the stations of the cross in church, cried out, What are they doing to Jesus! They're hurting him!) I told him that the seal would be fine. It would go back into the sea and the salt water would heal the wounds. And then I instructed him not to get too close to the seal, not to touch it, especially since it seemed hurt. And then--I don't know why, perhaps I felt deprived of mammal intimacy--I told him to take pictures with his phone, from a distance, to get off the dunes, where he was not supposed to be, and to run back to where I was beached.

When Max returned a half hour later he told me that he had zigzagged down the dunes--so as not to cause this great escarpment to collapse--and then ran toward the area where the seal had been resting only to find that his friend was gone. Returned to the sea. But before he called me from the top of the sandy slope, before he even thought to set his fingers on any buttons, or worry about collapsing dunes, he said, he sat face to face with the seal on the empty shoreline. Just him and the seal. The seal and him. And the seal barked ever so slightly, and Max gently said Hello back.

So the seal is fine. I said.

You had a moment with the seal. That's pretty special, don't you think?

I do. Yup. I do. And then he dug into the cooler and pulled out a water and a turkey sandwich. 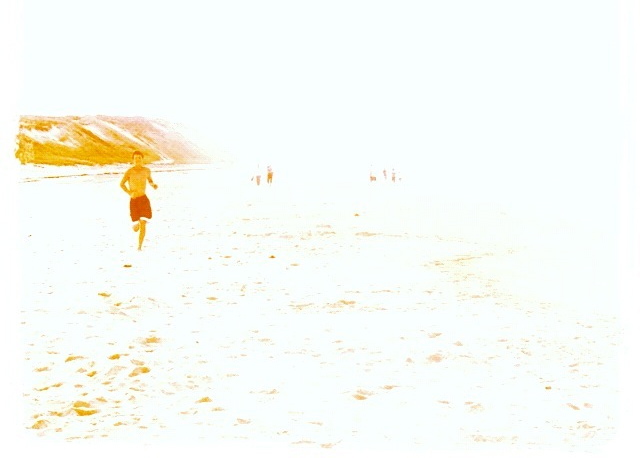 During an eight-year span in the mid-19th century, Henry David Thoreau set out on four walking tours of Cape Cod. Two of these tours were solo, and two were with the company of his friend and poet, William Ellery Channing, whom had previously advised Thoreau to go out into the briars and build a hut. Thoreau took Channing's advice in earnest. The book that followed that excursion is Walden. The book that followed Thoreau's Cape Cod jaunts is Cape Cod, which is the book that I read on the sand bar that is Cape Cod. It seems that these haunting, and haunted, sands are the closest I may ever get to experiencing a real desert. The Cape Cod National Seashore, in fact, is a kind of desert island. One can sit on the seashore for hours almost entirely alone, even in the hottest, dog days of summer. This graceful arm, especially its soft, sandy wrist to fist, has a history of luring artists and writers to its shores. In the dunes of Provincetown, through which we biked, we were reminded of the writer's shacks of years ago. A few still remain. Eugene O'Neill and Norman Mailer both, at one time, lived in these dune shacks. From a tiny, grey hut overlooking the Atlantic (so the story goes), Tennessee Williams wrote The Glass Menagerie and A Streetcar Named Desire. Here, on the Outer Cape.

And then, a friend of my husband's, who had led us, on our bikes, through several miles of hilly dunes at the tip of the Cape tells us that Mary Oliver is a Wellfleetian. Imagine. Mary Oliver in Wellfleet. (I hadn't heard or read this before, or if I had I'd forgotten.)  I wanted to imagine that I would run into her the next morning while sipping coffee out on the deck in front of The Flying Fish in downtown Wellfleet. But then, I looked her up--the Bard of Provincetown--to find only a P.O. Box number in P-Town. Maybe I misunderstood when he said, "She lives right here." But we were sitting on the brick patio of a Main Street, Wellfleet, restaurant. Right here, on the Outer Cape, may mean almost anywhere on the Outer Cape. (Oliver's bio on Poets.org states that she currently resides in Provincetown.)

We had dinner in Truro the night before we left the Cape. Most nights had been cloudy and threatening, but this evening, our last, was clear and dry. Before we returned to our rental in the woods we stopped by Newcomb Hollow for a last look at the falling sands, the beach, the breakers. Along the shore a few bonfires blazed, some had been abandoned and smoldered. We listened to crackling fires, to waves piling up against what seemed the edge of the universe. The night was very dark, black-dark, and we proceeded carefully down the slope, onto the beach, where we stood under the flawless dome of a flickering galaxy.

No. It was more than flawless. Impossibly beautiful, it was. Astonishing. To the left, to the right, north or south the sky pulsated, fiery dots shot through the sky, auditioned, as if they had waited for our reflection, for our very being so that they might demonstrate their capabilities. I think, truly, they were playing with us.

On the shore, by a pit of orange embers, I pulled out my cell phone. One photograph of the shimmering Milky Way and I understood that the evening could not be captured this way. It could not be digitized, put under any unnatural process, reimagined elsewhere. It was only here--Midnight under the Milky Way--below this celestial canopy under which its myriad characters glint and transmute, on the Outer Cape, land of the surreal, that this beach, this sky, this ocean, this sand was real. Very real. 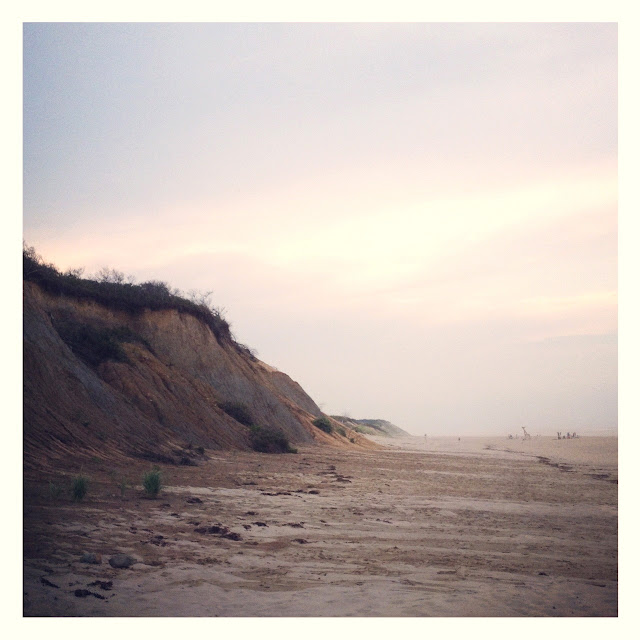