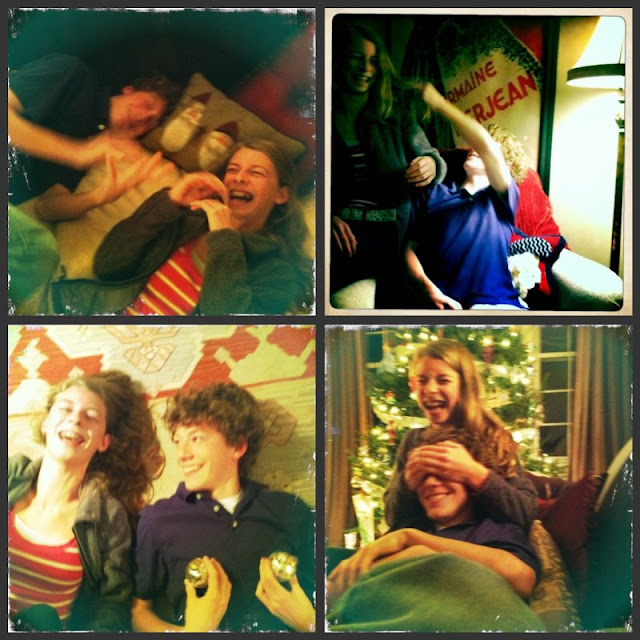 Fa la la la la, la la la la...  ♪♫
(I know, I know, a month long absence but I hadn't planned it! I've been involved in a writing project, a collaborative effort, of which I may share a bit here at SS at a later date. Now, on to other current happenings...)


And just how was I supposed to get a respectable Christmas card from this photo session? It's nearly impossible with my two. That's because my two are what you might call, well, "non-directable." Which is why I only got to mailing semi-decent photo cards on Thursday night.
Here is the thing about having card-age children: their shiny facsimile simply must appear on the annual Christmas cards. This is one of the unwritten rules of parenting. And as you know, I am not a professional photographer. It wouldn't make any difference if I were, either. The one and only time I brought my children to see a professional photographer (who took--it seemed--hundreds of pictures) for a photo shoot, I secured from him only two semi-decent photos. Of course, it didn't help that we were in a big, beautiful park on a bright and warm day, and the children were simply beguiled by the parks stunning landscape. They clawed and climbed every tree, chased every duck, jumped in the pond, and mauled the poor photographer for his camera.
Anyhow... those now teenaged children let me in on a little secret this year. It went something like this:
Oh, Ma, the girl said, You don't have to play that game anymore. Max and I know there's no Santa. And we've known for a while, really.
(I'd asked her only for a list. The usual Christmas list for Santa.)
Ok, well, you may not believe, I replied, but you should probably write something up for Santa anyway. You know, just in case.
(She may be over Santa, but I intended to perpetuate the charade.)
So the girl gave me not only a multi-paged list written on lined paper torn from a small notebook, but she also stuck raised bunny stickers to mark--like asterisks--the special items, and stapled applicable coupons at the top of her list (which, by the way, is no longer addressed: Dear Santa). 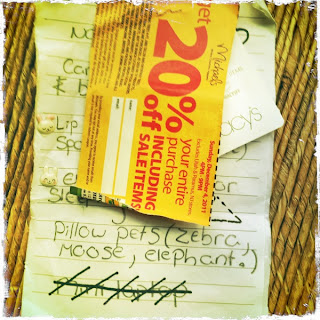 Every year Lulu's list looks the same. Boots, clothing and stocking stuffers like lip balm, nail polish, eye mask, body lotion, socks, duct tape and anything else that happens to cross her mind at the moment the list is suggested. Pages and pages. This year, she added a laptop to the manifest and then crossed it off when she realized that she had virtually no chance of getting one. (She tinkers on my old clunker--as if that's not good enough!)
Meanwhile, her brother can barely produce a single page. Oh, whatever Santa wants to bring is fine, he says. Listen kid, I want to tell him, I need something! I can't go hunting without a list, I need to follow a scent, something to scratch and stalk! I suppose I could have said that to him this year--and probably the past several years--but then the poor kid wouldn't have been able to carry on the charade, himself. And he certainly doesn't want to hurt anyone's feelings.

Last night, as we put finishing touches on some of the festive  decorations, Lu announced that she'd still like to leave milk and cookies on a tray for Santa. Is that so, I said.

Well, Mom, she smiled, even though I know that Santa doesn't really exist, I'd like to leave the milk and cookies for him. And, you know, pretend. Just in case.

Just in case. I think no matter how old we get, we all want to preserve the magic of Christmas. Tonight, we'll put the milk and cookies out. And then the magic will begin...