Mac and the Learning Curve 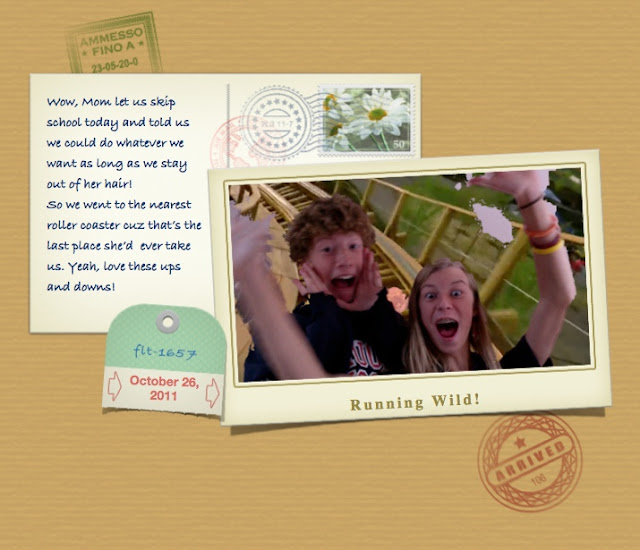 The Suburban Soliloquist a/k/a Mom (or Mother or, as Daughter likes to say now and then, Jayne) is on her own roller coaster of a ride—figuring out how to maneuver about a new piece of technology. And while she does that, she's sent the kids off to school or the park or the ice arena or the corner deli or wherever their little hearts desire—she almost doesn't care—as long as they do not return until late afternoon because she has a lot of work ahead of her.

Learning curves. At fifty. At least there are still some curves.

While she manages new hardware and software (and shaky internet connections), she'd like to offer one of those letters she mentioned in her Meet the SS page. Here, a look back—nearly four decades earlier—to sixth grade: 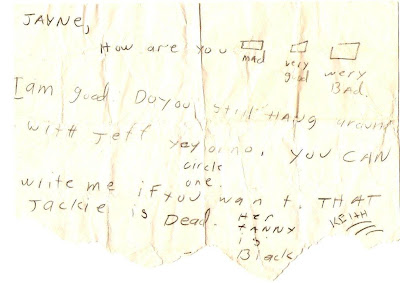 Note, in particular, the limited answer choices for how she felt at the time.  Was she, in sixth grade, always either very good or very bad or just plain mad? (One might argue that she's always been just plain mad.) It appears she did not care to answer any of Keith's questions, nor comment on the color of Jackie's fanny. In fact, she does not even remember Keith (triple underscore), but is pretty sure of which Jackie he speaks. Every class has its own Jackie.
She wonders if her little sprite and knight pass around their own notes in class. Perhaps not. Perhaps they fear detention and the consequential black fanny for note-passing. Corporal punishment is not still employed in Catholic schools, now is it?
Come to think of it, the Suburban Soliloquist does not remember hanging out with Jeff either. Oh, but Jackie. One never forgets a Jackie...
Posted by Jayne at 11:04 AM

Email ThisBlogThis!Share to TwitterShare to FacebookShare to Pinterest
Labels: anxiety, It Was Exactly Like This When I Was Growing Up, Stress, technology