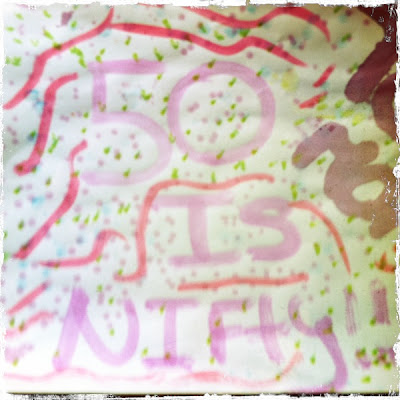 Fifty is nifty when you're twelve years old and in pressing need of rhyme for Mother's birthday card. But when you're fifty—when you're actually fifty, well, somehow it doesn't feel so nifty. Nor peachy, nor swell, nor cool. Nor... you get the picture. I mean, you get the picture—just look at it! Filled with squiggly lines and creases and greenish-brown age-like marks. It's a bit crumpled and uncertain of whether it's an upper or lowercase condition! Clearly, it wants to be uppercase, but the t and y informs us that its appearance is dwindling.

Say what? You don't see age marks and wrinkles on that card? You mean it's confetti and streamers? Ooooh! You see how twisted one's perception becomes at the ripe old age of fifty? Fifty is shifty is what is fifty.

For my birthday, Hubby gave me poetry 180—A Turning Back to Poetry, which is an anthology of contemporary poems carefully selected and introduced (said introduction can be read here) by Billy Collins. In it is one I love—probably the shortest—by Carol Snow:

Near a shrine in Japan he'd swept the path
and then placed camellia blossoms there.

Or—we had no way of knowing—he'd swept the path
between fallen camellias.

In Tour, there are possibilities. There are lovely fallen camellias on a path that has been swept near a shrine in Japan. Does it matter if we do or don't know when or how the camellias came to be placed upon the path?

That's what fifty is like. I'm on a tour. Paths have been swept. Camellias have fallen. There are other bits and buds with which I've littered the path, and some I've gladly cleared it of. I can't know everything about the path, or the fallen camellias—other than they have, indubitably, fallen—but there are possibilities. Still.


If I had to pull together a soundtrack covering the paths I've traveled these past fifty years, there would likely be a trail sprinkled with Neil Young song crumbs. It would lead one from his early days with Buffalo Springfield, Crazy Horse, and Crosby, Stills, Nash and Young up to his live album A Treasure, released in June 2011, which includes a half dozen previously unreleased songs.

Some of the many paths I've followed over this half century remain constant, reliable courses lined with pretty flowers, while others became worn and treacherous and had to be abandoned. Still, paths await to be swept. Or littered with confetti and streamers.

Here, Neil Young returns to his native country in 2005 to perform with his wife, Pegi.

The Bridge School Concerts—25th Anniversary Edition—will be available on DVD and CD this Monday, October 24, 2011. You can preview the official trailer here.
Posted by Jayne at 6:06 PM