The Force of Gravity 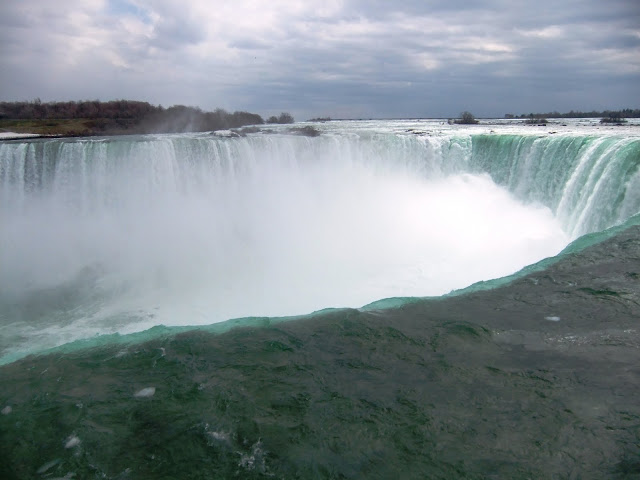 Can you imagine tumbling over this in a wooden barrel?

A seven hour drive takes us along the undulating banks of the Mohawk River and the Erie Canal, detouring at Charlie the Butcher in Buffalo for beef-on-wek, and up to Niagara Falls, Ontario, where I hadn't before been. In fact, I hadn't much desire to go. Niagara, I had been told, is a tourist trap. Stay on the Canadian side. And as I am an American only two generations removed from my one-hundred percent French-Canadian lineage, I, of course, choose to stay on the "other side." Ontario, as it turns out, is every bit as hospitable as its neighboring French-speaking Province.

Because we have just seen the documentary, Niagara: Thunder of the Waters, and it is barely a day away (and in my mind, a better option than Disney), and Easter in Nantucket anchors the far end of our vacation, we decide a Niagara to Nantucket vacation is manageable.

Mom, will you ever take us to Disney? Lulu asks.

I've successfully been avoiding Disney for nearly a dozen years. I've no intention of breaking that streak.

With the girl, it's always best to be perfectly candid. She stares at me, arms crossed, head tilted to the side with her I-can't-believe-you face. Every-body takes their kids to Disney.

Look, kid, I tell her, to be honest, I've no interest in Disney. I've been to Disney several times, once on a joy ride and many times for business. It's entirely manufactured and I don't care for it. Besides, your brother has motion sickness. It's not how I want to spend a vacation, walking around with a pocketful of Dramamine and, well you know, the proverbial barf bag. When you're an adult you can take your own joy ride down to Florida.

Oh, I don't care, she says. Whatever. Niagara Falls will be fun. It's fine.

(It's always all fine with Lulu, so long as she is in motion. Going somewhere.)

In fact, the fabricated world constructed in Niagara Falls is more like a miniature Las Vegas than Disney. Old Vegas. Tired casinos, beat-up arcades, low-end wax museums, haunted houses, and bland, over-priced restaurant franchises. To be sure though, a bit of Disney, a fifteen minute high tech movie ride—a motion simulator in 4D—at a cost of fifteen dollars for two, a  four-times-around sky wheel for forty bucks (and in high winds, the scare of your life), and a ten dollar ticket that gets you a five minute run through a paint splattered plywood maze. 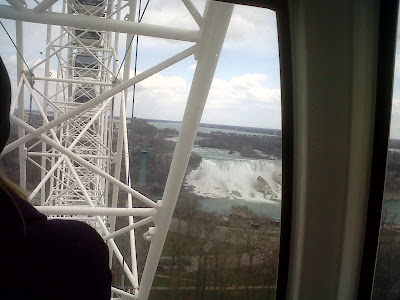 But what it does have that the twinkling desert city out west or the fantasy world down south does not is a natural wonder, a remnant of the ice age, a force so magnificent that, when harnessed, may illuminate up to 3.8 million homes.

And ice blocks amassing in the Niagara River mid April.

The entire city is laden by mist. Cold, gray and rainy (except for when it snows) for the length of our stay, making the Falls feel all the more dramatic. At Table Rock one can feel the Fall's gravity. You can almost dip your hand in its chilly current, but you don't as you sense a violent pull into its churning belly.

Further north, Niagara-on-the-Lake sits at the edge of where Lake Ontario meets the Niagara River—a micro-climate of abundant grapes protected by the Niagara Escarpment, its landscape a stark contrast to the neon lit Falls. Picturesque and inviting, its residents have settled there from around the globe, and many operate quaint boutiques along its charming Main Street. At least two dozen wineries thrive in the rich clay soils outside of the tight knit village, and Shaw Theatre runs shows (including Shakespeare) year round.

Monday, snow was falling along Niagara-on-the-Lake's Main Street. The shopkeepers assured us that the weather was unique for this time of year. At The Olde Angel Inn, an historic inn dating back to before the war of 1812, pints were served along with bangers and mash. There: a chance meeting with an old acquaintance of my husband's, a man from Manchester, England who'd fallen in love with southern Ontario and had made it his home for nearly fifty years. A soccer (or football, he would say) fanatic. A Union leader who many years ago played a pivotal role at United Steelworkers Canada by securing a mill position for the first female steelworker (aside from women who'd been hired as clerical help) in Ontario. A story unto its own.

And so it went that we ventured, unexpectedly, from the power of the Falls to the power of people, all within the span of a few miles. Such is the force of gravity. In nature. In man. What we can harness around, about and within ourselves. Should we desire.

Stumbling out of Peller Estates Winery—our final stop in the lakeside town—the air had warmed and clouds parted. Lingering snow and mist, evaporated. In Monday's early evening glow, nestled in the Escarpment, I felt the weight of the region's natural wonders. Like a daring drop over the falls in a wooden barrel, it was exciting. 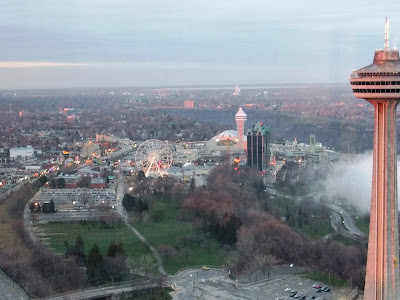