"Friday Night Frolic" - Living On The Edge Of A Precipice

War creates no absolutely new situation: it simply aggravates the permanent
human situation so that we can no longer ignore it.
Human life has always been lived on the edge of a precipice.
~C.S. Lewis 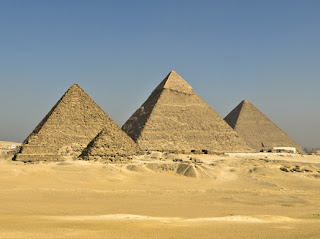 In Egypt—the land of pharaohs and the Great Sphinx of Giza, where children skip through streets acting out tales of One Thousand and One Nights—in The City of a Thousand Minarets, where the sun sets over the Nile and Orion's Belt beats down on ancient ruins and dusty roads, a barbarian polo game is being played in Tahrir Square. Camels and stallions are draped with Persian carpets and mounted by riders brandishing mallets, beating back the dense crowd of chanting opponents—unarmed peaceful resisters. Looters ransack age-old buildings, thugs hurl firebombs and slabs of stone from rooftops, snipers fire into a mob of anti-government demonstrators. People lay dying on the quad known—in English—as Liberation Square. From Cairo a great eruption spreads across the river and desert, a plague of boils and darkness over the land that hearkens Moses.

And the limestone Sun Goddess cries tears of blood that trail into the raging Nile.

The Pharaoh refuses to step down, unwilling to go quietly into the night. What is his worry? Has he no royal cartouche? His people throw their fists in the air, urging democracy, demanding an end to his rule. Today is the last day, they shout. Even the Pharaoh's army will no longer support their king. And the swelling, praying, protesting crowd will not back down. Today is the day of departure.

A barefoot African princess has come east from her archipelago, and sits calmly on Mount Catherine's summit, her weary voice burning ballads against the tonal sky...

... Who will show us the way? She knows hardship. She knows suffering. She knows revolution and solidarity. She knows morna. And when she sings it, the Egyptian people—the whole world—know freedom.


Cesária Évora's latest album, Nha Sentimento (2009), is a collaboration with Cairo musician and composer Fathy Salama.
Posted by Jayne at 7:00 AM