Since I've been run down and not feeling well of late, making it a bit difficult to see the world, to read, never mind write (and converse, OY!, forgedaboudit!), I'm going to attempt to dazzle you, first, with some original photography; second, with more original photography; third, with engaging video; and fourth, with, well, more engaging video.


Part I
This is what I call the prelude to the Arrival of the Martians at Barnstable Harbor. They are coming, you know. After all, we did invade their extraterrestrial territory. They are due in three weeks or so, just in time for the grand callithump that is known as Halloween. (Now you believe me—don't you?—that I am quite ill.)

I'm posting this particular photo because, unfortunately, I will not be in Barnstable for Halloween and therefore will not be able to offer photo-documentation of the actual coming, or landing, of the Martians. But rest assured, the above is honest evidence that I was, indeed, in Barnstable Harbor for the psychedelic Martians-are-coming prelude. (I'd better warn my mother-in-law.)

While in New York a couple of weeks ago, I met (I'm using that term loosely, although I really do think, er, believe, that I met) U.S. Poet Laureate (2001-2003) Billy Collins  at the Brooklyn Book Festival, as well as the Pulitzer Prize-winning, U.S. Poet Laureate (2011-2012) Philip Levine. Seated directly in front of me, he was, Billy Collins. Eyes penetrating my glazed, hazel irises. We shared a smile. A wink. A...

You don't believe me, do you? Here, another photo—taken just before the shared winks: 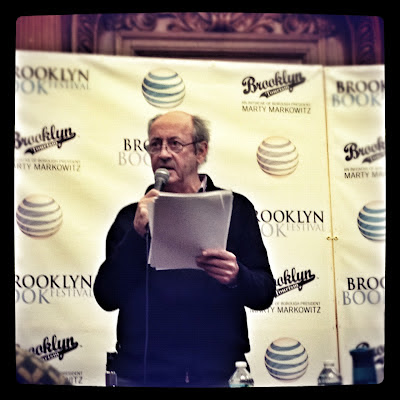 But, let's get back to the Martians for a moment. Here, in this contemplative poem, Billy recites the derelictions of certain Martians with whom we are familiar, Martians whom, without thought or, sometimes, expression, land on, and feed off of, our verdant, selfless earth, often forgetting to reseed:

(The young gentleman seated beside Billy Collins is Ishmael 'Ish' Islam, New York City's 2012 Youth Poet Laureate. He may be one of those Martians, though, I think not. See Ish, the award winning poet and producer, here, reading his poem Daydreaming at the Voting Booth.)

And now, to round off this shivaree, one last reading by Mr. Collins, inspired by the poem Drinking Alone, written by Li Po, whom we might also describe as one of those self-indulgent Martians:

Beware the Martians. Do not, under any circumstance, let them drink alone! (Or just plain drink.)
Posted by Jayne at 5:38 PM