What She's Thinking About When She's Alone in the Car Thinking 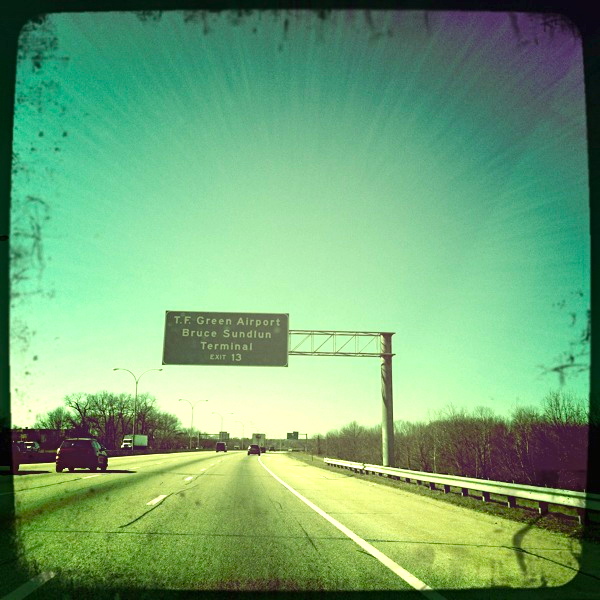 Usually, she tries to think about the road. Ordinarily she listens. To NPR, to which she is utterly addicted. Sometimes she fantasizes that she is working for NPR. Or with NPR, with its brilliant reporters, producers and commentators. Maybe she's assisting with or producing a show for Ira Glass. Or Terry Gross. Or Bob Boilen. Or Robin Young. Or, Wait, Wait!, Peter Sagal. And Carl Kasell, who's taken her under his wing, not only records dulcet-toned voice messages for her answering machine, but personally delivers them to her home, and stays long enough to personally answer at least one phone call. She wonders how long he'd have to stick around. She reminds herself to keep the fridge stocked with his favorite crudités.

She speculates that perhaps she's been away from the office for too long. No one, with whom she might bounce around an idea, sits within earshot (or footsteps) of her kitchen cubicle. Her mind is beginning to atrophy, working from home. This would never happen at NPR.

She looks at the great green sign hovering over the highway, announcing the number of miles to the next exit, and questions how well it's mounted onto the steel tubular mast arm, and whether or not the tubular supports have been compromised, corroded by exposure to the elements, like rain and natural wind gusts. She considers the stress of wind shears, cracks in truss connections, welded joints and anchor rods. Have the high strength threaded nuts and bolts, by which the sign is pinned to its mast, been installed properly? What's to prevent these fasteners from being stripped and loosened? How tired is the sign? Who manufactured the bolts? How shoddy is the overall work? If that sign drops from its arm, she concludes, it becomes the supreme guillotine.

She imagines it slicing her car in half. Or worse.

And then there are the bridges. She doesn't want to go there: pondering the percentage of time truckers ignore load carrying limits, or, given state and federal budget constraints, how often these structures are actually inspected. She recalls certain steel deck truss failures and mulls over the integrity of design, the condition of the piers and cantilevers, reinforcements and anything else that might have anything whatsoever to do with preventing the bridge from its almost certain doom of sudden collapse.

The wooden crosses on the side of the highway unnerve her, but she reckons they're a sober reminder for her son, who, within little more than a year's time, will acquire his driver's license. She reminds herself not to remind him of this. Then she reminds herself to remember not to remind him of this. Perhaps he'll forget that he wants to learn how to drive.

She doesn't like the guy in front of her who is on his cell phone and swerving from lane to lane. She beeps her horn. Wake the HELL up!

She gets irritated by the big Peterbilt trucks that box her in. She wonders if the trucks might hit the overhead signs, or blast them from their nuts and bolts by the sheer force of truck-induced wind gusts. And if the guy on the cell phone, weaving in and out of three lanes, might be right behind the truckers. Hmm.

But now she's slipping off the highway, right at the exit, the sky is ablaze in blue, and the static crackling of radio interference has subsided. Composer Philip Glass fades back in. On Point. The furling and unfurling movements of Symphony No. 9 illuminate the airwaves, and her mind wanders off to the fields and the geese, pushing, flapping, harder and harder, determined to lift themselves from the grassy glebe. Suddenly, they are off, in flight, in harmony, with springtime's cerulean breeze. And in the driveway, she listens, and dares not turn off the engine.


03 Symphony No. 9 Movement III by Suburban Soliloquist
Posted by Jayne at 2:01 PM