Friday Night Frolic — A Mouse is a Mouse, For All That

"It's a constant battle between mice and men."
~ Lulu 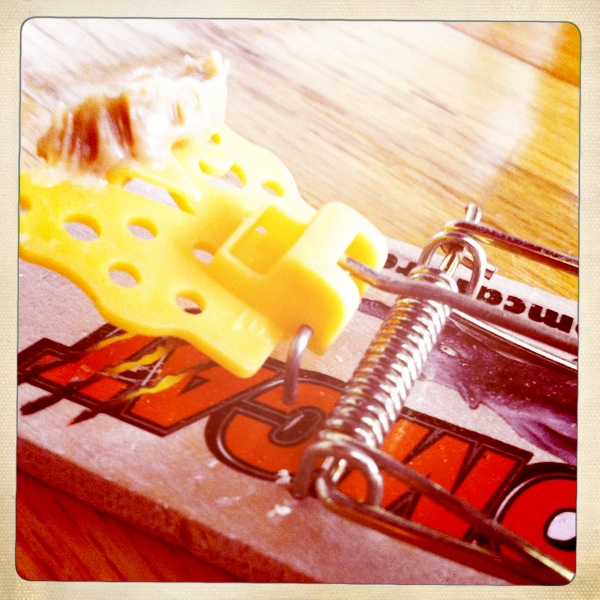 Small, crafty, cowering, timorous little beast,  O, what a panic is in your little breast!  You need not start away so hasty  With argumentative chatter!  I would be loath to run and chase you,  With murdering plough-staff.
I'm truly sorry man's dominion  Has broken Nature's social union,  And justifies that ill opinion  Which makes thee startle  At me, thy poor, earth born companion  And fellow mortal!
I doubt not, sometimes, but you may steal;  What then? Poor little beast, you must live!  An odd ear in twenty-four sheaves  Is a small request;  I will get a blessing with what is left,  And never miss it.
Your small house, too, in ruin!  Its feeble walls the winds are scattering!  And nothing now, to build a new one,  Of coarse grass green!  And bleak December's winds coming,  Both bitter and keen!
You saw the fields laid bare and wasted,  And weary winter coming fast,  And cozy here, beneath the blast, You thought to dwell,  Till crash! the cruel plough passed  Out through your cell.
That small bit heap of leaves and stubble,  Has cost you many a weary nibble!  Now you are turned out, for all your trouble,  Without house or holding,  To endure the winter's sleety dribble,  And hoar-frost cold.
But little Mouse, you are not alone,  In proving foresight may be vain:  The best laid schemes of mice and men  Go often askew,  And leave us nothing but grief and pain,  For promised joy!
Still you are blest, compared with me!  The present only touches you:  But oh! I backward cast my eye,  On prospects dreary!  And forward, though I cannot see,  I guess and fear!

~Robert Burns, "To a Mouse, On Turning Her Up in Her Nest with the Plough" [Standard English Translation] *

Our furry mortal companions, after all, are merely trying to meet the three basic needs of any living thing: water, food, shelter (and clothing for us lesser humans). Air and sunlight help, too. So what exactly is the battle? What is this compulsion to subordinate nature to man? Can we not work together, in harmony? Maybe this is why Michael leaves peanut butter out for our critters? (She naively asks.)

The thing is, though, the mice have come into our natural world. Our home. And they are, to be sure, small and crafty. Their careful approach to the mouse traps—evidenced by clawed peanut butter globs atop the plastic cheese of traps set around the house—illustrates their slyness and resolve. We are housing and feeding the beasts. Like hell they startle at us!

Up until Michael found a few mini-Santa chocolates haphazardly unwrapped—broken pieces of Santa-shaped, teeny-gnaw-marked chocolate bits scattered under the Christmas tree—the children were accused of consuming too much candy and leaving foil wrappers strewn about the house. Not one of you will fess up, eh? And why the heck are so many ornaments knocked off the tree? Well? They stared at me with eyes narrower than usual. You mock your mother?!

Soon after Max's and Lu's acquittal, while de-decking the house of boughs of holly and sucking all traces of pine into a monster canister, I broke out the vacuum's brush attachment, lifted the cushions from the living room's couch and found a trove of bird seed that had been hoarded by the mice. Under the cushion of a fabric-covered chair, I discovered a small, sugar-sprinkled gingerbread cookie (a treat left for our Santa chimera), shredded ribbon and other scraps. I wondered if it hadn't taken a platoon of mice to conceal their booty. Our house had become the bandits' very own Moveable Feast—a splendid place brimming with tasty morsels and sparkly lights, with ample nooks and chinks for notable adventures. Who needs Paris?!

And then my breast went a-panic. Bold rodents! What have they to worry about? They'll tear apart the pantry! I thought about d-CON (for a moment), and shored up all food-filled containers, vacuumed and sprayed and scrubbed. And then Michael went for the traps.

But our mice are much too clever.

There's a little voice inside me, though, thanking the gods for not mashing the head of one mouse in those traps. Yes, the fields are bare and wasted, and the bleak winds of winter have arrived, but the critters are merely trying to survive. There must be a more humane way to rid our domain of them (for it's quite impossible and far too unsanitary to co-exist in the same domicile). Is there not?

Until we figure it out, Max will carry on about the pests' scratchy evening shenanigans keeping him awake at night. And I'll stock up on glass containers.


King Rat (an illegal whale hunt protest) by Indie rock band Modest Mouse, has an official animated video, directed by the late Heath Ledger, that's apparently been hijacked by VEVO. If you'd like, you can see it here. Modest Mouse has been making music since 1997, but it wasn't until 2004 that they established mainstream success with We Were Dead Before the Ship Even Sank, for which they enlisted musician and vocalist James Mercer of the Shins, and Broken Bells (with whom we Frolicked here), as well as help from Johnny Marr (former Smiths guitarist). Marr ultimately toured, in 2007, with Modest Mouse.

You can find more information, including tour dates, on MM's blog. They'll be playing in San Francisco, at the Macworld/iWorld convention, January 25, 2012.


Hmm, the only modest thing about our mice is that they don't make a show of it while we're still puttering around the house. But in the evenings, they Frolic!